Macy's Herald Square (originally named the R. H. Macy and Company Store) is the flagship of the Macy's department store chain; it is located on Herald Square in Manhattan, New York City. The building's 2.5 million square feet (230,000 m2), which includes 1.25 million square feet (116,000 m2) of retail space, makes it the largest department store in the United States and among the largest in the world.

The Macy's building was completed in 1902 after the store had occupied several previous locations in New York City. The building was added to the National Register of Historic Places and was made a National Historic Landmark in 1978. 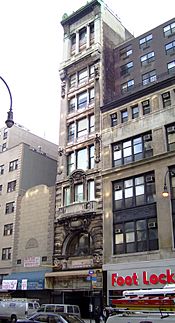 Macy's was founded by Rowland Hussey Macy, who between 1843 and 1855 opened four retail dry goods stores, including the original Macy's store in downtown Haverhill, Massachusetts, established in 1851 to serve the mill industry employees of the area. They all failed, but he learned from his mistakes. He moved to New York City in 1858 and established a new store named "R.H Macy Dry Goods" at Sixth Avenue on the corner of 14th Street. On the company's first day of business on October 28, 1858, sales totaled $11.08, equivalent to $346.39 today. From the very beginning, Macy's logo has included a star in one form or another, echoing a red star-shaped tattoo that Macy got as a teenager when he worked on a Nantucket whaling ship.

As the business grew, Macy's expanded into neighboring buildings, opening more department stores, and used publicity devices such as a store Santa Claus, themed exhibits, and illuminated window displays to draw in customers. The store later moved to 18th Street and Broadway, on the "Ladies' Mile", the elite shopping district of the time, where it remained for nearly forty years.

In 1875, Macy took on two partners, Robert M. Valentine (1850–1879), a nephew; and Abiel T. La Forge (1842–1878) of Wisconsin, who was the husband of a cousin. Macy died just two years later in 1877 from Bright's disease, The following year La Forge died and Valentine died in 1879. Ownership of the company was passed down through the Macy family until 1895, when the company, now called "R. H. Macy & Co.", was acquired by Isidor Straus and his brother Nathan Straus, who had previously held a license to sell china and other goods in the Macy's store. 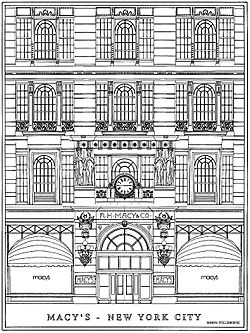 In 1902, the flagship store moved uptown to Herald Square at 34th Street and Broadway, so far north of the other main dry goods emporia that it had to offer a steam wagonette to transport customers from 14th Street to 34th Street. Although the Herald Square store initially consisted of just one building, it expanded through new construction, eventually occupying almost the entire block bounded by Seventh Avenue on the west, Broadway on the east, 34th Street on the south and 35th Street on the north, with the exception of a small pre-existing building on the corner of 35th Street and Seventh Avenue and another on the corner of 34th Street and Broadway. Robert H. Smith purchased this latter 5-story building in 1900 for $375,000 (equivalent to $9,182,967 in 2020) with the idea of getting in the way of Macy's becoming the largest store in the world: it is largely supposed that Smith, who was a neighbor of the Macy's store on 14th Street, was acting on behalf of Siegel-Cooper, which had built what they thought was the world's largest store on Sixth Avenue in 1896. Macy's ignored the tactic, and simply built around the building, which now carries Macy's "shopping bag" sign by lease arrangement. That building earned the name Million Dollar Corner when it was finally sold for a then record $1 million on December 6, 1911.

The original Broadway store was designed in 1901-1902 by architects Theodore de Lemos and A. W. Cordes under their architecture firm De Lemos & Cordes and was erected by the Fuller Construction Company. It has a Palladian facade, but has been updated in many details. Other additions to the west were completed in 1924 and 1928, and the Seventh Avenue building in 1931, all designed by architect Robert D. Kohn, the newer buildings becoming increasingly Art Deco in style. The store boasts several wooden escalators still in operation. 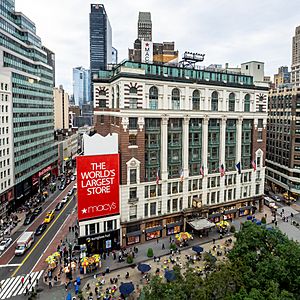 In 2012, Macy's began the first full renovation of the flagship store at a reported cost of $400 million. Studio V Architecture, a New York-based firm, was the overall master plan architect of the project, with Kevin Kennon Architects providing the exterior and entry way designs. The renovations completed in November 2015 but Macy's continues to modify the store to suit changing customer tastes and maximize return on the real estate.

In 2016, the company explored adding one or two towers to the building to house hotel or office space.The next year, it considered turning the structure's roof into a park. Macy's unveiled plans in 2019 to build a 1.2-million-square-foot (110,000 m2) office building atop the existing store. The following February, the plans were updated: the tower would be over 900 feet (270 m) tall and consist of 1.5 million square feet (140,000 m2) of space, including a sky lobby. The tower's construction would also include improvements to the nearby area.

Every year, Macy's is noted for its elaborate animated holiday and Christmas window displays in many locations across the U.S., but most notably at the Herald Square location. Each year presents a different theme shown in six windows on the Broadway side of the building. Each window includes animated displays with complex scenery, attracting thousands of people to view them. Since 2012, the windows have been designed, fabricated and animated by Standard Transmission Productions, located in Red Hook, Brooklyn.

In 2007, Macy's launched a curated public art exhibition at the Herald Square flagship using its windows as a means to display pieces from several fashion designers including Misaki Kawai, Anna Sui and John F. Simon Jr.. The exhibit was titled Art Under Glass and was viewable to the public during the summer of 2007 through that year's fashion week.

Through a partnership with tech retailer b8ta, this Macy's location has a "The Market @ Macy's" section, which features pop-up spaces for new brands.

All content from Kiddle encyclopedia articles (including the article images and facts) can be freely used under Attribution-ShareAlike license, unless stated otherwise. Cite this article:
Macy's Herald Square Facts for Kids. Kiddle Encyclopedia.