Red Lodge is a town in and the county seat of Carbon County, Montana, United States. It is part of the Billings Metropolitan Statistical Area. The population was 2,257 at the United States Census, 2020.

According to the United States Census Bureau, the city has a total area of 2.80 square miles (7.25 km2), all of it land.

On September 17, 1851, the United States government signed a treaty with the Crow Nation, ceding the area which now contains Red Lodge to the Crow Indians. Rich coal deposits were found there in 1866, and gold was discovered nearby in 1870. An 1880 treaty between the U.S. government and the Crow allowed the area to be settled starting April 11, 1882.

The Red Lodge post office was established on Dec 9, 1884 with Postmaster Ezra L. Benton. A rail line was constructed into town, and coal shipments began in June 1889. The boundaries of the Crow Reservation were redrawn October 15, 1892, opening the whole area to settlement. From then until the 1930s, coal mining defined the town.

In the late 19th century, many new settlers came to Red Lodge. The majority came from Italy, Scotland, Wales, England, Finland, Norway, Sweden, Germany, and Austria-Hungary. By the mid-1880s, migrants were still outnumbered by large numbers of Native Americans. By 1892 the population reached 1,180.

Red Lodge suffered in the Great Depression, which forced many mines to close. To offset this downturn, the manufacture of illegal bootleg liquor, labeled syrup, became an economic mainstay and was sold as far away as Chicago and San Francisco.

In 1931 work began on the Beartooth Highway linking Red Lodge to Yellowstone National Park; it was officially opened in 1936.

The downtown has been redeveloped since the mid-1980s for historic and cultural tourism, as the Red Lodge Commercial Historic District. The buildings in downtown Red Lodge had fallen into disrepair, in large part because population had dropped from its 1915 peak of 6000 people to about 2,000.

As of 2006, an estimate suggests that the population of Red Lodge may increase from about 1,200 people in the winter to over 1,800 people during the summer tourist season, arriving via the Beartooth Highway. 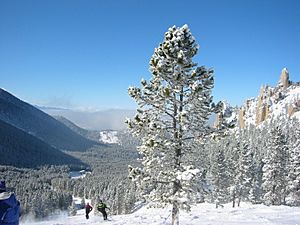 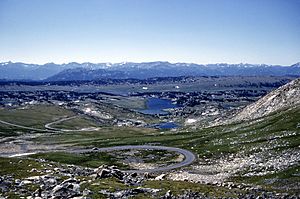 Red Lodge is well known for many outdoor recreation opportunities: skiing, mountain biking, and backpacking are nearby. In April it is host to a popular triathlon called the Peaks to Prairie.

Red Lodge experiences a continental climate (Köppen Dfb) with cold, somewhat dry winters and warm, wetter summers. Summers are cooler than in areas of Montana further north, due to the high elevation. Winters however, are milder than areas further to the east due to the chinook wind influence, as with most of Montana.

In 1943 tragedy hit Smith Mine #3 near Bearcreek, the area's largest remaining mine. An explosion trapped and killed 74 men with only three of the workers in the mine that day escaping making it the worst coal mine disaster in Montana's history. The mine was shut down shortly thereafter but was reopened in the late 1970s. The Red Lodge cemetery contains a memorial.

There were 1,082 households, of which 19.5% had children under the age of 18 living with them, 35.6% were married couples living together, 8.2% had a female householder with no husband present, 3.6% had a male householder with no wife present, and 52.6% were non-families. 43.8% of all households were made up of individuals, and 14.4% had someone living alone who was 65 years of age or older. The average household size was 1.92 and the average family size was 2.62.

Red Lodge Airport is a public use airport located one mile (1.85 km) northwest of town.

All content from Kiddle encyclopedia articles (including the article images and facts) can be freely used under Attribution-ShareAlike license, unless stated otherwise. Cite this article:
Red Lodge, Montana Facts for Kids. Kiddle Encyclopedia.