The Beartooth Mountains are located in south central Montana and northwest Wyoming, U.S. and are part of the 944,000 acres (382,000 ha) Absaroka-Beartooth Wilderness, within Custer, Gallatin and Shoshone National Forests. The Beartooths are the location of Granite Peak, which at 12,807 feet (3,904 m) is the highest point in the state of Montana. The mountains are just northeast of Yellowstone National Park and are part of the Greater Yellowstone Ecosystem. The mountains are traversed by road via the Beartooth Highway (U.S. 212) with the highest elevation at Beartooth Pass 10,947 ft (3,337 m)). The name of the mountain range is attributed to a rugged peak found in the range, Beartooth Peak, that has the appearance of a bear's tooth.

The Beartooth Mountains sit upon the larger Beartooth Plateau.

The remoteness of the region contributed to its obscurity until the 1870s. The Crow tribe of Native Americans used the valleys of the mountains for hunting game animals and for winter shelter from the harsh winds of the plains. Though trappers entered the region in the 1830s, formal exploration by the U.S. Government did not occur until 1878. While there has been gold discovered earlier in the mountain range the major expansion of mining began in 1882. Expansion continued adding more infrastructure for the mines. As growth continued there were six companies that had stakes in the New World Mining District. Between 1900-1955 the district has produced over 65,000 oz of gold, 500,000 oz of silver, and amounts of copper, zinc, and lead ore. One of the main limiting factors was the remoteness. Over time many of the mines ceased operations due to lack of funds or collapses that were not financially viable to correct. In 1989 Crown Butte Mines proposed massive additions to operations in the area. Once they began preparations for starting new mining operations, they came under public scrutiny based on the proximity to Yellowstone National Park and public fears that waste would find its way into the park. In 1996 the federal government paid Crown Butte Mines $65 million to defray costs they had already paid; they had to pay $22.5 million to help repair the damage done to the surrounding environment.

The Beartooth Mountains have been considered for inclusion in the national park system. In 1939, the director of the National Park Service drafted a presidential proclamation outlining the boundaries of a "Beartooth National Monument," but President Franklin D. Roosevelt never signed it. During the summer of 1960, The Wilderness Society organized an expedition into the Beartooths for Forest Service and National Park Service officials. Members of the expedition debated whether the mountains ought to be a wilderness area or a national park, but they reached no consensus and never made a formal proposal. Environmental advocates continued to push for the area's preservation in order to defend the northern borders of Yellowstone National Park from development. Finally, in 1975 the Beartooths were protected as part of the Absaroka–Beartooth Wilderness. 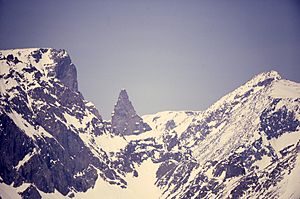 Beartooth Peak in the Beartooth Mountains

The ecosystem of the Beartooth Mountains is one of the most unique in the Contiguous United States partly due to being part of the Greater Yellowstone Ecosystem. This space allows a great diversity with 34,375 square miles of nearly intact wilderness. With the protection to the terrestrial habitats all of the bodies of water are classified as Outstanding National Resource Waters, giving them the highest protections under the Clean Water Act. The cleanliness of the bodies of water led them to be used as a benchmark to compare others in the northern Rocky Mountains. Most of the current species are currently protected.

The mountains are home to many of North America's largest animals, including one of the few grizzly bear populations in the contiguous United States. There are rare sightings of lynx and wolverines and a population of cougars and recently reintroduced wolves. There are some of the largest herds of bison and elk in North America.

The Beartooth Mountains also have a very diverse range of trees, mostly conifers with stands of aspen and cottonwoods. The conifers mainly consist of Engelmann spruce, subalpine fir, whitebark pine, and lodgepole pine below 9,000 ft. Above 9,000 ft. there are few trees, the flora including grasses, wildflowers, and sagebrush.

The Beartooth mountains are composed of Precambrian granite and crystalline metamorphic rocks dated at approximately 2.7 to 4 billion years old, making these rocks among the oldest on Earth. The Stillwater igneous complex within the mountains is the location of the largest known deposits of platinum and chromium and the second largest deposits of nickel found in the United States. Older ages (4-3.2 billion years) are found in zircon crystals in meta-sedimentary rocks. The most abundant rocks in the Beartooths (gneiss, amphibolites and granites, as well as the Stillwater Complex) are 2.9-2.7 billion years old.

Huge expansive plateaus are found at altitudes in excess of 10,000 ft (3,000 m) with over 25 peaks exceeding 12,000 ft (3,700 m). The mountains have over 300 pristine lakes and some waterfalls in excess of 300 feet (91 m). Winters are severe with heavy snow and incessant winds. Approximately 25 small glaciers exist in the Beartooths with Grasshopper Glacier being one of the more distinctive.

The highest peaks of the Beartooth Mountains are clustered in three groups, topped by Granite Peak, Mount Wood 12,649 ft (3,855 m), and Castle Mountain 12,617 ft (3,846 m). The cluster containing Mount Wood is named the Granite Range. The largest of these three contiguous areas above 10,000 feet (3,000 m), which extends into Wyoming, is the one dominated by Castle Mountain.

All content from Kiddle encyclopedia articles (including the article images and facts) can be freely used under Attribution-ShareAlike license, unless stated otherwise. Cite this article:
Beartooth Mountains Facts for Kids. Kiddle Encyclopedia.