Panguitch ( PANG-gwitch) is a city in and the county seat of Garfield County, Utah, United States. The population was 1,520 at the 2010 census, and was estimated in 2018 to be 1,691. The name Panguitch comes from a Southern Paiute word meaning “Big Fish,” likely named after the plentiful nearby lakes hosting rainbow trout year-round.

According to the United States Census Bureau, the city has a total area of 2.1 square miles (5.5 km2), all of it land. 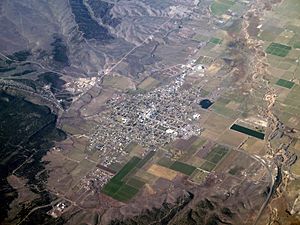 Panguitch was first settled in March 1864, when Jens Nielsen, a Danish convert to The Church of Jesus Christ of Latter-day Saints (LDS Church), led a group of pioneers eastward from Parowan and Beaver to the Sevier River. Due to the area's high elevation, 6,600 feet (2,000 m) above sea level, the settlers' initial crops did not mature and the community suffered severely during the first harsh winter. At a crisis point, seven men left the community to seek flour and foodstuffs from surrounding communities. Heavy snow forced the abandonment of wagons and teams, and the men finished their rescue mission on foot, reportedly by laying one quilt after another upon the snow to maintain their footing.

Due to a conflict with native tribes, the Black Hawk War in Utah, the community was temporarily abandoned in 1867 but was resettled in 1871. Some residents specializing in timber and livestock production were quite successful until economic shifts following World War I. Due to the establishment of Bryce Canyon National Park and the designation of nearby areas as national forests, tourism has since played a major role in the local economy.

There were 502 households, out of which 40.4% had children under the age of 18 living with them, 67.3% were married couples living together, 8.4% had a female householder with no husband present, and 21.9% were non-families. 19.1% of all households were made up of individuals, and 11.2% had someone living alone who was 65 years of age or older. The average household size was 3.05 and the average family size was 3.55.

U.S. Highway 89 runs through Panguitch from Circleville in the north to Kanab in the south. State Route 143 runs south to Panguitch Lake.

All content from Kiddle encyclopedia articles (including the article images and facts) can be freely used under Attribution-ShareAlike license, unless stated otherwise. Cite this article:
Panguitch, Utah Facts for Kids. Kiddle Encyclopedia.