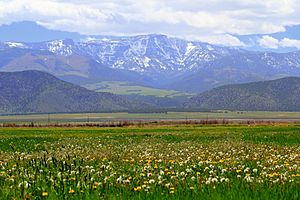 Circleville is a town in Piute County, Utah, United States. The population was 547 at the 2010 census.

According to the United States Census Bureau, the town has a total area of 9.1 square miles (23.5 km²), all of it land.

Circleville was originally settled in 1864. The town was named for the shape of the valley in which it is located, Circle Valley. The valley is completely circled by mountains except where the Sevier River goes in and out of the valley on the north and south.

On Jun 28th, 1866, the town was abandoned by the original settlers. A few settlers began to trickle back into the area in 1873 and the town was re-established in 1874 when Charles Wakeman Dalton crossed the mountain from Beaver with two of his wives and family.

Circleville became an incorporated community on 24 August 1921. Local residents were interested in facilitating the public services which municipal government provides, and they were particularly interested in building a culinary water system.

There were 172 households, out of which 37.2% had children under the age of 18 living with them, 68.0% were married couples living together, 5.8% had a female householder with no husband present, and 22.7% were non-families. 22.1% of all households were made up of individuals, and 14.5% had someone living alone who was 65 years of age or older. The average household size was 2.94 and the average family size was 3.45.

Utah's most notorious native son, the elusive international cowboy outlaw, Robert Leroy Parker, better known as Butch Cassidy, grew up in Circle Valley just a mile from Circleville (but he was born considerably further to the west, across the Tushar Mountains, in the town of Beaver, Utah). His family's small cabin, on the outskirts of town, is still standing on the land they homesteaded. It can be seen on the west side of the road almost exactly one mile to the south of Circleville on what is now US Highway 89. The cabin's location is also just 6 miles (9.7 km) south of the smaller town of Junction, the county seat, and about 26 miles (42 km) north of Panguitch.

Charlie Siringo visited Circleville while in pursuit of the Wild Bunch. Siringo wrote, "a week was spent in the straggling village of Circleville, and I found out all about 'Butch's' early life and much about his late doings. His true name was Parker, his nickname being 'Sallie' Parker when a boy. This nickname of itself was enough to drive a sensitive boy to the 'bad'. I had hard work to keep from falling in love with Miss Parker, the pretty young sister of 'Butch' Casiday. She was the deputy postmistress in Circleville, and I made her acquaintance."

Lula Parker Betenson (b. 1884), sister of "Butch" Cassidy, lived in Circleville, dying aged 96 in 1980. Betenson's 1975 book Butch Cassidy, My Brother, co-authored with Dora Flack, recounts her memory that Cassidy visited Circleville in 1924, adding to the controversy over whether he had died previously in South America. This visit by Cassidy to Circleville is also reported by author W. C. Jameson in Butch Cassidy: Beyond the Grave.

All content from Kiddle encyclopedia articles (including the article images and facts) can be freely used under Attribution-ShareAlike license, unless stated otherwise. Cite this article:
Circleville, Utah Facts for Kids. Kiddle Encyclopedia.