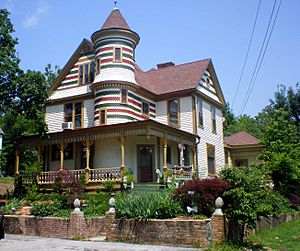 Boston financier Thomas Lawson's residence in Grand Rivers, when he was promoting the town as the next great steel-making center, to rival Pittsburgh and Birmingham.

Grand Rivers is a home rule-class city in Livingston County, Kentucky, in the United States. The population was 382 at the 2010 census, up from 343 in 2000. It is part of the Paducah micropolitan area.

The town was formerly located at the narrowest point between the Cumberland River and the Tennessee. Both were dammed and artificial lakes created by the Tennessee Valley Authority in the early 20th century; the town now lies on an isthmus of land between Kentucky Lake and Lake Barkley.

Grand Rivers may have originally been known as Narrows from its position between the Cumberland and Tennessee Rivers. The local post office was established in 1879 as Otisville; changed its name in 1882 to Bernard; and was then changed again to Nickells the next year after the name of a new Illinois Central station.

The settlement was formally incorporated by the state assembly in 1890 as Grand Rivers. This newly expanded community was part of local businessman Thomas W. Lawson's attempt to develop local iron deposits into a major steel industry. (The enterprise failed within a few years.) The name refers the Cumberland and Tennessee rivers which previously met near the site, prior to the TVA's creation of Kentucky Lake and Lake Barkley. The Tennessee's confluence with the Ohio is located within 40 miles of the town as well.

There were 165 households out of which 17.6% had children under the age of 18 living with them, 53.3% were married couples living together, 4.8% had a female householder with no husband present, and 37.0% were non-families. 33.9% of all households were made up of individuals and 17.6% had someone living alone who was 65 years of age or older. The average household size was 2.07 and the average family size was 2.63.

All content from Kiddle encyclopedia articles (including the article images and facts) can be freely used under Attribution-ShareAlike license, unless stated otherwise. Cite this article:
Grand Rivers, Kentucky Facts for Kids. Kiddle Encyclopedia.