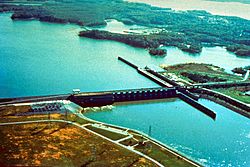 Lake Barkley, a 58,000-acre (230 km2) reservoir in Livingston, Lyon, and Trigg counties in Kentucky and extending into Stewart and Houston counties in Tennessee, was impounded by the U.S. Army Corps of Engineers in 1966 upon the completion of Barkley Dam. Both the lake and the dam are named for Vice President Alben Barkley, a Kentucky native. The dam impounds the Cumberland River near Grand Rivers, Kentucky, approximately 38 miles (61 km) upstream from where the Cumberland empties into the Ohio River. One mile (1.6 km) above the dam is a canal connecting Lake Barkley with Kentucky Lake, forming one of the greatest freshwater recreational complexes in the country. The lakes run parallel courses for more than 50 miles (80 km), with the Land Between The Lakes National Recreation Area located between them.

As with the formation of Kentucky Lake, communities were flooded in the 1960s to build Lake Barkley. You may hear someone refer to Eddyville and "Old Eddyville", as well as Kuttawa and "Old Kuttawa". The "Old" areas were the portions of the cities that were left above the water after the areas were flooded; these old areas are now lakefront. The present-day cities were created on nearby sites after the lake was impounded. Old foundations and streets, previously flooded, are still visible during winter pool. Highways were even relocated, including US 68 and US 62, along with state routes and smaller streets. The Illinois Central Railroad was also relocated; the former alignment can still be seen under water from low flying planes above.

Lake Barkley State Resort Park is located on the eastern shore of the lake.

The largest yellow bass ever taken in Kentucky (1 lb., 1 oz.) was caught in the waters of Lake Barkley.

All content from Kiddle encyclopedia articles (including the article images and facts) can be freely used under Attribution-ShareAlike license, unless stated otherwise. Cite this article:
Lake Barkley Facts for Kids. Kiddle Encyclopedia.