Chehalis ( shə-HAY-ləs) is a city in Lewis County, Washington, United States. The population was 7,259 at the 2010 census. It is the county seat of Lewis County.

Chehalis began as a settlement around a warehouse beside a railroad track in 1873, when the Northern Pacific Railroad built northward from Kalama to Tacoma, and ignored Claquato, then the county seat three miles to the west. After the Northern Pacific bypassed Claquato, the county seat was moved to Chehalis, leaving Claquato little more than a historical landmark. By 1874, a store was added to the warehouse, and several houses were constructed. The new town was first named Saundersville, for S.S. Saunders, on whose donation land claim it was founded. In 1879, the name was changed to Chehalis, named after the Chehalis people; Chehalis was a native term roughly meaning "shifting sands", denoting the muddy bottomland along the Chehalis River which had long vexed stagecoach travelers on the Washington arm of the Oregon Trail between Kalama and New Market (now Tumwater). Chehalis was incorporated on November 23, 1883.

The city straddles Interstate 5 at a point almost exactly halfway between Seattle, Washington and Portland, Oregon. The historic downtown and most of the city's amenities lie on the east side of the freeway, nestled at the base of a small range of forested hills. On the west side of the freeway are parks, farms, and a few subdivisions developed in the hills to the west. A small airport is located immediately west of the freeway towards the northern end of the city. From numerous vantage points in the hills just west of town, one can see Mount Rainier, Mount Adams, and Mount St. Helens—weather permitting. Chehalis is a frequented stop by bicyclists while on the annual Seattle to Portland Bicycle Classic.

The Chehalis River winds its way through the valley in which the city resides, and is there joined by a tributary, the Newaukum River. Both rivers are prone to flooding during periods of abnormally heavy or persistent rain, and the lowlands from the freeway westward are particularly susceptible to inundation.

This region experiences warm (but not hot) and dry summers, with no average monthly temperatures above 71.6 °F. According to the Köppen Climate Classification system, Chehalis has a warm-summer Mediterranean climate, abbreviated "Csb" on climate maps. 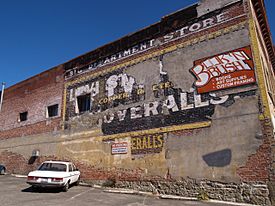 There were 2,868 households of which 31.1% had children under the age of 18 living with them, 36.9% were married couples living together, 14.9% had a female householder with no husband present, 6.0% had a male householder with no wife present, and 42.3% were non-families. 35.3% of all households were made up of individuals and 16.8% had someone living alone who was 65 years of age or older. The average household size was 2.36 and the average family size was 3.02.

There were 2,671 households out of which 33.2% had children under the age of 18 living with them, 43.8% were married couples living together, 14.4% had a female householder with no husband present, and 36.5% were non-families. 30.4% of all households were made up of individuals and 15.1% had someone living alone who was 65 years of age or older. The average household size was 2.46 and the average family size was 3.06. 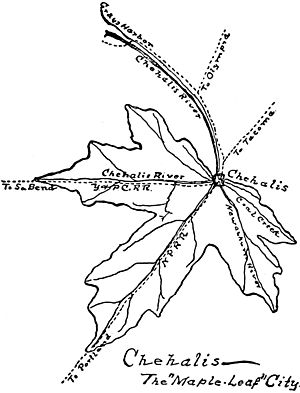 A map showing the Chehalis River, tributaries, and area railroads as forming the shape of a maple leaf.

All content from Kiddle encyclopedia articles (including the article images and facts) can be freely used under Attribution-ShareAlike license, unless stated otherwise. Cite this article:
Chehalis, Washington Facts for Kids. Kiddle Encyclopedia.