Kalama is a city in Cowlitz County, Washington, United States. It is part of the 'Longview, Washington Metropolitan Statistical Area'. The population was 2,500, according to the Washington State Office of Financial Management.

The story endorsed by the city Kalama is that the city was named after the nearby Kalama River which took its name from a Native Hawaiian named John Kalama. An alternate story, from James W. Phillips Washington State Place Names states, "General J.W. Sprague of the Northern Pacific Railroad named the town in 1871 for the Indian word calama, meaning "pretty maiden.". There is an additional story. Gabriel Franchere in 1811 wrote of the Indian village at the mouth of the Kalama River, and he said it was called Thlakalamah (This story predates all of the others)

Kalama was first settled by Native Americans, particularly members of the Cowlitz Indian Tribes. The first white settler recorded was in 1853. That first settler was Ezra Meeker and his family. Only one year later, Meeker moved to north Puyallup, Washington, but he sold his Donation Land Claim to a Mr. Davenport, who, with a few others, permanently settled in the Kalama area. In early 1870, Northern Pacific Railway scouts came to Cowlitz County to find an ideal terminus along the Columbia River. After a failed negotiation for a Donation Land Claim in Martin’s Bluff, four miles south of Kalama, Northern Pacific officials purchased 700 acres in Kalama for the terminus of the new railroad as well as a new headquarters. The population swelled with employees of the Northern Pacific Railway. 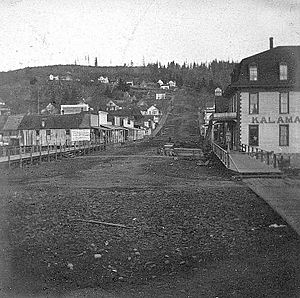 Kalama was entirely a Northern Pacific railroad creation. It was unofficially born in May 1870 when the Northern Pacific railroad turned the first shovel of dirt. Northern Pacific built a dock, a sawmill, a car shop, a roundhouse, a turntable, hotels, a hospital, stores, homes. In just a few months in 1870, the working population exploded to approximately 3500 and the town had added tents, saloons, a brewery, and a gambling hall. Soon the town had a motto: "Rail Meets Sail". Recruiters went to San Francisco and recruited Chinese labor, who moved to their own Chinatown in a part of Kalama now called China Gardens. The population of Kalama peaked at 5,000 people, but in early 1874, the railroad moved its headquarters to Tacoma, and by 1877, only 700 people remained in Kalama.

Kalama was unofficially incorporated on November 29, 1871. It served as the county seat of Cowlitz County from 1872 to 1922. Kalama was the northern terminus of a railroad ferry operated by the Northern Pacific Railway from Goble, Oregon. This was a critical link in rail service between 1883 when the service began until 1909 when the major rail bridges in Portland were completed. Kalama originated with a stake driven by Gen. John W. Sprague of the Northern Pacific Railway who in March 1870 selected a spot near the mouth of the Kalama river to mark the beginning point of Northern Pacific's Pacific Division. From that stake, the Northern Pacific began building north to Puget Sound, ultimately getting to Commencement Bay at what was to become Tacoma before going bankrupt. Construction began in April 1871 with a crew of 800 men, with the official 'first spike' being driven in May 1871 Scheduled service from Tacoma to Kalama began on January 5, 1874. The Portland-Hunters line was completed about the same time that the ceremonial spike was driven west of Helena, Montana to mark the completion of the transcontinental Northern Pacific Railroad in the fall of 1883. The following year in October 1884, a 3 track, 360-foot (110 m) long railroad ferry marked the beginning of 25 years of ferry service across the Columbia River. Hunters was located near the south end of Sandy Island about a mile south of Goble. However the crossing times were excessive when the Tacoma had to work against the tide, and the ferry slip was soon moved to Goble at the north end of Sandy Island and directly across from Kalama. The ferry could handle 12 passenger cars or 27 freight cars.

Kalama, like many small towns in the US, are very enthusiastic about their sports. Upon making entrance in the city, there is a sign celebrating the local H.S.'s State Championships [See the inset photograph]. 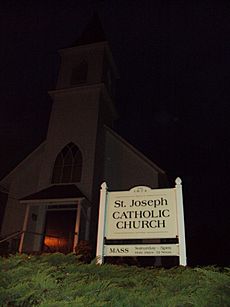 St. Joseph's Catholic Parish was built in 1874, around the same time the railroad from Kalama to Tacoma, WA first came operational. This was the first and only Catholic Parish in Kalama.

According to Cowlitz County GIS data, the total incorporated area for the city of Kalama is 3.5 sq. miles.

Highway access to Kalama is provided by Exit 27, Exit 30, and Exit 32 from I-5. The industrial district is along the river front while the business district is on the east side of I-5. Residential areas are up the hill to the east and on the cliffs above town, portions of which have dramatic views overlooking the Columbia River. The busy Portland-Seattle rail connection parallels I-5 to the west on double tracks (or more) all the way through town.

This region experiences warm (but not hot) and dry summers, with no average monthly temperatures above 71.6 °F. According to the Köppen Climate Classification system, Kalama has a warm-summer Mediterranean climate, abbreviated "Csb" on climate maps.

There were 967 households of which 31.6% had children under the age of 18 living with them, 52.0% were married couples living together, 11.5% had a female householder with no husband present, 5.3% had a male householder with no wife present, and 31.2% were non-families. 25.4% of all households were made up of individuals and 10.6% had someone living alone who was 65 years of age or older. The average household size was 2.42 and the average family size was 2.88. 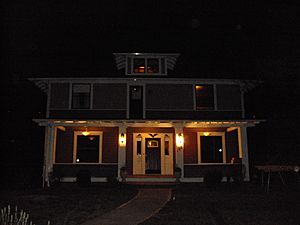 Kalama is home to one of the tallest single-log totem poles in the entire world, which is surrounded by a park on the Columbia River. The totem pole is 140 ft (42.6 m) tall, and was carved by Chief Lelooska. 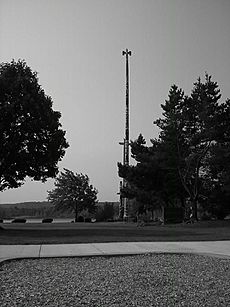 According to a Columbia Inn sign in Kalama, Elvis Presley and Jack Benny, stayed at the Columbia Inn hotel in 1962.

Scenes from the Twilight movie franchise were filmed in the Kalama H.S. parking lot.

Anna Kashfi (Joanna O'Callaghan) Brando Hannaford, the first wife of Marlon Brando, was a long-term resident of Kalama until her death. Kashfi and her son Christian Brando are buried in Kalama.

Craft brewery Pyramid Breweries was founded in Kalama in 1984.

All content from Kiddle encyclopedia articles (including the article images and facts) can be freely used under Attribution-ShareAlike license, unless stated otherwise. Cite this article:
Kalama, Washington Facts for Kids. Kiddle Encyclopedia.