In the 1850s and 1860s, Centralia's Borst Home at the confluence of the Chehalis and Skookumchuck Rivers was the site of a toll ferry, and the halfway stopping point for stagecoaches operating between Kalama, Washington and Tacoma. In 1850, J. G. Cochran and his wife Anna were led there via the Oregon Trail by their adopted son, a free African-American named George Washington (Washington pioneer), as the family feared he would be forced into slavery if they stayed in Missouri after the passage of the Compromise of 1850. Cochran filed a donation land claim near the Borst Home in 1852, and was able to sell his claim to Washington for $6000 because unlike the neighboring Oregon Territory, there was no restriction against passing legal ownership of land to negroes in the newly formed Washington Territory.

Upon hearing of the imminent arrival of the Northern Pacific Railway (NP) in 1872, George Washington filed a plat for the town of Centerville, naming the streets after biblical references and offering lots for $10 each, with one lot free to buyers who built houses. Finding that another town in the south-central part of the state bore the same name, the town was officially incorporated as Centralia on February 3, 1886, so christened by a recent settler from Centralia, Illinois. The town's population boomed, then collapsed in the Panic of 1893, when the NP went bankrupt; entire city blocks were offered for as little as $50 with no takers. Washington (despite facing racial prejudice from some newcomers) made personal loans and forgave debt to keep the town afloat until the economy stabilized; the city then boomed again based on the coal, lumber and dairying industries. On his death in 1905, all businesses in the town closed, and 5000 mourners attended his funeral.

The boom lasted until November 11, 1919, when the infamous Centralia Massacre occurred. Spurred on by local lumber barons, American Legionnaires (many of whom had returned from WWI to find their jobs filled by pro-union members of the International Workers of the World), used that day's Armistice Day parade to attack the IWW hall. Marching with loaded weapons, the Legionnaires broke from the parade and stormed the hall in an effort to bust union organizing efforts by what was seen to be a Bolshevik-inspired labor movement. Though it remains a point of controversy as to who fired first, IWW workers led by Wesley Everest engaged and killed four Legionnaires; Everest was captured, jailed and then lynched, and other IWW members jailed. The event made international headlines, and coupled with similar actions in Everett, Washington and other lumber towns, stifled the American labor movement until the economic devastation of the 1930s Great Depression changed opinions about labor organizations.

The town's name proved to have longevity when it became the midpoint between Seattle and Portland, Oregon during the development of Washington's I-5 portion of the Interstate Highway System. As extractive industries faced decline, Centralia's development refocused on freeway oriented food, lodging, retail and tourism, as well as regional shipping and warehousing facilities, leading to 60% population growth over the past four decades.

This region experiences warm (but not hot) and dry summers, with no average monthly temperatures above 71.6 °F. According to the Köppen Climate Classification system, Centralia has a warm-summer Mediterranean climate, abbreviated "Csb" on climate maps. Temperatures are usually quite mild, although Centralia is generally warmer in the summer and colder in the winter than locations further north along the Puget Sound.

There were 6,640 households of which 31.6% had children under the age of 18 living with them, 37.7% were married couples living together, 14.4% had a female householder with no husband present, 6.1% had a male householder with no wife present, and 41.8% were non-families. 33.8% of all households were made up of individuals and 15.8% had someone living alone who was 65 years of age or older. The average household size was 2.41 and the average family size was 3.06.

There were 5,943 households out of which 29.4% had children under the age of 18 living with them, 41.7% were married couples living together, 13.0% had a female householder with no husband present, and 40.0% were non-families. 32.7% of all households were made up of individuals and 16.9% had someone living alone who was 65 years of age or older. The average household size was 2.40 and the average family size was 3.02.

Centralia College is the oldest continuously operating junior college in the state of Washington. The college has been in operation since September 14, 1925. The college’s first classes were held in the top floor of the Centralia High School building and classes were taught by part-time teachers who also taught high school students.

The college found its beginning in large part due to the efforts of C. L. Littel, Centralia Public Schools Superintendent and Dean Frederick E. Bolton of the University of Washington School of Education. During the early years Centralia College prepared students who would later go on to enroll at the University of Washington and a special partnership between the colleges remained in place until 1947. The following year Centralia College earned its accreditation from the Northwest Commission on Colleges and Universities. Two years later the college’s first major campus building, Kemp Hall, was constructed in the heart of Centralia.

The effort to expand and develop a separate campus was largely influenced by the end of WWII and newly enacted GI Bill. This created an oversupply of new students ready to train for their career with limited space to do so. Just prior to this, enrollment had been shrinking, as many young Centralians and other residents of Lewis County had left to join the war effort. Prior to the war, the college’s future was previously in jeopardy during the Great Depression and resulting local bank closures. From approximately 1925 through the 1940s the college was primarily funded through private loans and donations from local businesses and community members, but steady funds were not always readily available. Credit for Centralia College surviving during these difficult times is in part given to Margaret Corbet, administrator, faculty member, and namesake of Corbet Hall, due to her efforts to keep the college financially afloat.

Starting in the fall of 2012, Centralia College will begin offering a bachelor's degree program in Applied Science in Management. The degree is the first undergraduate degree offered by the college and part of an overall expansion of the school under the projected '20 year plan'. 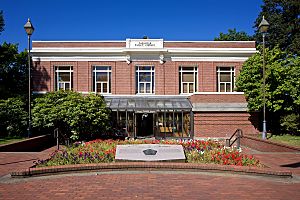 Borst Home Built in 1864 at the site of the toll ferry crossing at the confluence of the Chehalis and Skookumchuck rivers, the Borst Home fulfilled a promise by Joseph Borst to his young wife Mary to build her the finest home along the Washington extension of the Oregon Trail. The original home is open to tour as part of the large Borst Park complex along I-5 exit 82.

Carnegie Library is located in Washington Park and was originally built in 1913 followed by a remodel in 1977-78. The building houses a large chandelier taken from the old Centralia High School. The library is now part of the Timberland Regional Library system. Every summer, the library hosts the annual Twin Cities pet show, and in the month of December, it is the site of the annual Christmas Tree Lighting.

Centralia Farmer’s Market is held Fridays, May to September and has been in existence since 1996. The market features locally grown produce, annuals and perennials, baked goods and handcrafted items.

Centralia Park System consists of a variety of 15 beautiful parks, trails, and recreational and outdoor areas of interest scattered across 240 acres of combined space. Fort Borst Park is the largest of these areas with over 100 acres of park space. It is home to Borst Park Pond, nearby Chehalis and Skookumchuck Rivers, and adjoining outdoor sports facilities. Within the park you can also find the historic 1860s Borst Mansion, the iconic old Fort Borst Blockhouse and a replica of the original Borst One Room Schoolhouse.

Centralia Square Built in 1920 by Joseph Wohleb, Washington's first professional architect, this long-time Elks Lodge was restored in 2015 to its original glory, including a 9-room boutique hotel with ballroom, two restaurants and the town's original antique mall. The building also features a mural depicting the laborer's side of the Centralia Massacre as a counterpoint to the statue commemorating the American Legionnaires slain in that incident, which stands in the Carnegie Library park across the street. 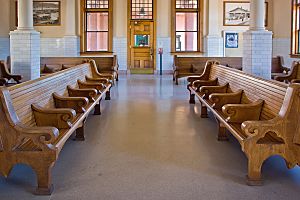 The interior of Centralia Union Depot

Centralia Union Depot was built in 1912 and features red brick architecture, vintage oak benches, and internal and external woodworking throughout. In 1996, restoration projects were started. They finished in 2002. The depot is currently served by Amtrak as the midpoint between Kelso, Washington and Olympia, Washington. The depot is also served by connections to the Twin Transit Transportation system and is located within walking distance to Carnegie Library, Historic Fox Theater, McMenamin’s Olympic Club Hotel & Theater, and Santa Lucia Coffee Company, as well as various eateries, shops and antique vendors.

Fox Theater originally opened on September 5, 1930. It was built with approximately 1,200 seats over three seating levels. The first film seen by the public was Buster Keaton in Doughboys. In 1982 the theater underwent renovations and separated the main stage into three smaller screening areas. The theater closed in 1998 and was purchased by Opera Pacifica in 2004 and underwent initial stages of restoration. In 2007 the City of Centralia bought the theater and it is currently being further restored by the Historic Fox Theatre Restorations. Limited film performances began again in 2009.

McMenamin’s Olympic Club Hotel & Theater opened in 1908 followed by an extensive remodel in 1913. Since then much of the building has remained unchanged. The hotel hosts 27 European-style guestrooms. Each room is named after a person of interest, including Roy Gardner, a train robber caught behind the hotel in 1921. The club was originally only frequented by gentlemen but has been opened to families for many years. The theater shows second run films, musical and comedy performances, and some televised sports events. The theater has replaced theater seating with various chairs and couches throughout. The pub serves Terminator Stout, Hammerhead, Ruby and other beverages and food items. Adjoining the pub and dining area is a 6-table poolroom and snooker table that was recently rated in the top 5 for “Best Pool Hall in Western Washington." Every April or May the Olympic Club host its annual Brewfest, where local, import and guest brews are highlighted.

Seattle-based rock band Harvey Danger uses Centralia as a metaphor in its song "Moral Centralia," found on the 2005 album Little by Little....

All content from Kiddle encyclopedia articles (including the article images and facts) can be freely used under Attribution-ShareAlike license, unless stated otherwise. Cite this article:
Centralia, Washington Facts for Kids. Kiddle Encyclopedia.