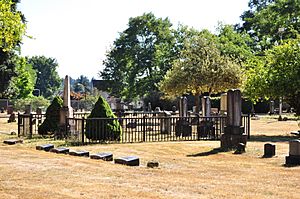 George Washington (August 15, 1817 – August 26, 1905) was the founder of the town of Centralia, Washington. He is remembered as a leading African American pioneer of the Pacific Northwest.

Born in within 10 miles of Winchester, Frederick County, Virginia, the son of a former slave and a woman of English descent, Washington was raised by a white couple named Anna and James Cochran.

When he was four, the Cochrans moved west to Delaware County, Ohio. This region contained several stops on the underground railroad. Then they left to Missouri. Washington became a skilled rifleman and taught himself to read. He was given full rights as a citizen, except for the right to vote, after the Cochrans petitioned the state of Missouri.

Fearing he might lose his freedom after the passage of the Compromise of 1850, Washington moved the Cochrans and himself over the Oregon Trail. Arriving in the Oregon Territory, they found he could not establish a claim for any land due to the exclusion laws in passed by the Oregon Territorial Legislature in 1849. Upon arrival because of these exclusion laws the Washington and his family were forced to settle nearby in Milwaukie. Washington started working as a logger, cutting timber for $90 a month plus board.

About 3 months after arrival in Milwaukie, Washington became very ill. The ailment was unknown but he was in serious condition. The closest hospital at this time in pioneer country was the Columbia Barracks military fort (later Fort Vancouver) on the north side of the Columbia River. When the Cochrans took him there for treatment, they were told it was just for soldiers. Although, when the doctor came and saw Washington's condition he had a change of heart. He performed surgery on Washington ultimately saving his life, but in the process poisoned him with calomel. The poison caused him to loose all of his hair permanently. Later in pictures we will see him wear wigs. He stayed in recovery in the Columbia Barracks for 3-4 months.

When he became well they moved back to the Milwaukie Area where eventually Washington settled his parents into a cabin on close in Cowlitz Landing.

Washington then left looking to settle his own land in the Olympia, Steilacoom and Seattle region of the territory. Although the law stood between Washington making a claim. He had the support of other settlers in the area who were against his exclusion. More than 100 pioneers petitioned on his behalf to let him stay on the land of the Oregon Territory. Although the petition was heard in court, the amendment to let Blacks stay in the Oregon territory failed. Luckily, the petition to allow Washington to stay was barely passed with a 17-6 vote. This decision would prove to be only a gesture because on March 2nd, 1853 the Washington Territory which George Washington eventually would make his claim on, was made official and had no laws of exclusion.

He then left and settled near the confluence of the Chehalis and Skookumchuck rivers, and the Cochrans claimed the land for the family in 1852. When Washington Territory was split from the Oregon Territory in 1853, the new territory's statutes did not preclude African Americans from owning land, and the Cochrans sold their land to him for $6000. George cared for his adoptive parents the rest of their lives, and later married newly divorced Mary Jane Cain Cooness, helping raise her son, Stacey.

Anticipating the arrival of the Northern Pacific railroad in 1872, Washington saw visions of a town on the southeast corner of his land. Saying that it is the center point between Kalama and Tacoma and so forth named it the city of Centerville. He named the streets after biblical references and setting aside land for a park (now the site of the Carnegie Library) and churches of many denominations. The town was incorporated as Centralia, Washington, in 1886 after it was discovered that another town in the territory already bore the name Centerville. This made Washington the only black person to found a town in the Pacific Northwest.

Washington was the proponent of steady growth using fair business practices. Some saying that he talked so square and straight forward that buyers would become suspicious.

Despite facing some racial prejudice at the hands of newcomers (many of whom migrated from the segregated post-Civil War south), George Washington supported many of the townspeople through the Panic of 1893, when the Northern Pacific went bankrupt and the town nearly collapsed. The town thrived in the boom started by the Alaska Gold Rush in 1898, and by the time he died in 1905 at the age of 88, Centralia had grown to a town of around 5,000 residents, who turned out en masse to honor him at his funeral. He is buried in the town's Washington Lawn Cemetery.

The town has a number of memorials to its founder, including a large stone monument telling his life story in the city's central plaza (a park donated by George and Mary Jane Washington, and known as George Washington Park).

During a year-long celebration of his 200th birthday, volunteers built a bronze statue of George and Mary Jane Washington that was placed in George Washington Park in August 2018.

All content from Kiddle encyclopedia articles (including the article images and facts) can be freely used under Attribution-ShareAlike license, unless stated otherwise. Cite this article:
George Washington (Washington pioneer) Facts for Kids. Kiddle Encyclopedia.