Winlock (/wɪnlək/) is a city in Lewis County, Washington, United States. The population was 1,339 at the 2010 census. It was named after territorial army general, Winlock M. Miller, who briefly resided there. Winlock is mostly famous for having the World's Largest Egg, reflecting its former status as a major producer of eggs. Early in its history, Winlock attracted many immigrants from Finland, Germany, and Sweden.

According to the United States Census Bureau, the city has a total area of 1.29 square miles (3.34 km2), all of it land.

Olequa Creek, a main tributary of the Cowlitz River, runs through the center of town from north to south.

The eastern edge of the Willapa Hills lie to the west. To the east are relatively flat prairies. A notable landmark about four miles west of town is Sam Henry Mountain, elevation 1492 feet, named for an early section superintendent of the Northern Pacific Railroad. Mt. St. Helens, about forty miles to the east can be seen from viewpoints around the area. In May 1980, Winlock was covered with about one inch of volcanic ash from the second major eruption of this peak one week after the cataclysmic eruption of May 18.

Winlock began as a Northern Pacific Railroad construction camp called Wheeler's Camp in c. 1871. The railroad was then in the process of extending its line from Kalama to Tacoma, Washington. Dr. C. C. Pagett, an early resident, donated the land for the townsite. In 1873 he named it for General William Winlock Miller of Olympia, a man of some renown in the area. Miller had promised to give a school bell to the town if it were to be named after him. The town was incorporated in 1883.

There were 475 households of which 38.9% had children under the age of 18 living with them, 46.5% were married couples living together, 13.5% had a female householder with no husband present, 8.8% had a male householder with no wife present, and 31.2% were non-families. 24.6% of all households were made up of individuals and 9.9% had someone living alone who was 65 years of age or older. The average household size was 2.79 and the average family size was 3.26.

There were 420 households out of which 35.7% had children under the age of 18 living with them, 53.3% were married couples living together, 10.0% had a female householder with no husband present, and 31.7% were non-families. 26.2% of all households were made up of individuals and 14.3% had someone living alone who was 65 years of age or older. The average household size was 2.78 and the average family size was 3.38.

Washington State Route 505 begins in Winlock and runs east to Interstate 5 and beyond to the town of Toledo. Highway 603, a former state route, continues north from Winlock to intersect with State Route 6 about 4 miles West of Chehalis.

The Burlington Northern railroad double track line runs through the middle of the town. Union Pacific and Amtrak trains also use these tracks. This line is the only rail connection between Seattle/Tacoma and Portland and supports heavy traffic. Freight service is available here but Amtrak does not stop, with the nearest station being in Centralia. 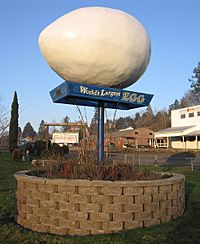 The Winlock Egg was listed as the world’s largest egg by Ripley's Believe It or Not! in 1989. The current structure is the fourth reincarnation of the original egg.

The first egg was built for a celebration of the opening of the Pacific Highway Bridge over the Columbia River between Washington and Oregon. The idea of an egg came from John G. Lawrence, the manager of the newly formed egg and poultry co-op as a way to represent the growing industry centered in Winlock in the 1920s. During that time farmers in Winlock were shipping as much as a quarter million cases of eggs to market a year.

The first egg was made of an egg shaped wood frame stretched with canvas and painted white. It was mounted onto a truck as part of a parade of floats and vehicles that traveled from the Olympia, Washington to Salem, Oregon on October 23, 1923, to celebrate the expansion of trade between Washington and Oregon through the railroad. After the parade, the egg was placed on a platform near the train depot, and has since remained a source of local pride, in one form or another.

The first egg was covered with plaster but after 20 years in the elements the egg had deteriorated and was replaced by a plastic version made a new company to the area, the Johnny Simpson’s Plastic Company. This version also lasted about 20 years when it fell from its platform and cracked. A fiberglass replacement was made that some people thought looked more like a football than an egg. Then in 1991 a new replacement egg was part of the Egg Day Parade before it was placed in the Vern Zander Memorial Park. After the 9/11 attacks on the world trade center the egg was painted as a red, white, and blue American flag. In 2014, the Seattle Seahawks logo was painted on the egg after they won the super bowl.

All content from Kiddle encyclopedia articles (including the article images and facts) can be freely used under Attribution-ShareAlike license, unless stated otherwise. Cite this article:
Winlock, Washington Facts for Kids. Kiddle Encyclopedia.