The eroded rock of the amphitheater is more eroded than, but otherwise similar to formations at nearby Bryce Canyon National Park, Red Canyon in Dixie National Forest and select areas of Cedar Mountain (SR-14). Because of its elevation, snow often makes parts of the park inaccessible to vehicles from October through May. Its rim visitor center is open from June through October. Several hundred thousand people visit the monument annually. The monument area is the headwaters of Mammoth Creek, a tributary of the Sevier River.

Wildlife can often be seen in this high altitude setting. Mule deer and porcupines are common, as are rodents and similar animals such as marmots, golden-mantled ground squirrels, pocket gophers, and chipmunks. Mountain lions and other larger animals live in the area but are seldom seen. Common birds include the Clark's nutcracker, violet-green swallows, and the common raven. 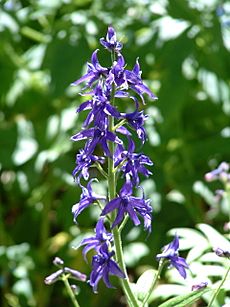 A Larkspur wildflower near the rim of Cedar Breaks.

The bristlecone pine, a species of tree that is known as the longest living single organism, can also be found in the high country, with some local specimens known to be more than 1600 years old. Sub-alpine meadows dot the canyon rim in such areas as Alpine Pond, which is an easy hike from the road along a clear trail. Aspen, Engelmann spruce, subalpine fir trees, and limber pine also grow here. 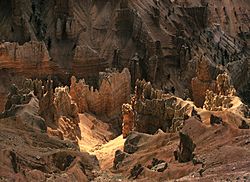 The amphitheater, located near the west end of the Colorado Plateau, covers the west side of the Markagunt Plateau, the same plateau that forms parts of Zion National Park. Uplift and erosion formed the canyon over millions of years, raising and then wearing away the shale, limestone, and sandstone that was deposited at the bottom of an ancient 70 by 250 miles (110 km × 400 km) lake, known as Lake Claron about 60 million years ago. It continues to erode at a pace of about 2 inches (50 mm) every 5 years. Atop the plateau, volcanic rock known as rhyolitic tuff covers much of the area, formed during cataclysmic eruptions around 28 million years ago.

The rocks of the eroded canyon contain iron and manganese in various combinations, providing brilliant colors that led Indians to call it the Circle of Painted Cliffs. Iron oxides provide the reds, oranges and yellows, while manganese oxides provide shades of purple. The color of rock is soft and subtle compared to the hoodoos at Bryce Canyon.

The area is a form of badlands—canyons, spires, walls, and cliffs so steep and confusing that the lands, while of great aesthetic value, are of little utilitarian worth. Early settlers called them badlands or breaks and created its current name by combining breaks with cedar for the many juniper trees (often incorrectly called cedars) that grow in the area.

Cedar Breaks National Monument was established in 1933. A small lodge, designed by Gilbert Stanley Underwood and built and operated by the Utah Parks Company once existed near the south end of the monument, but it was razed in 1972. The Cedar Breaks Lodge was the smallest of the park lodges in the Southwest. It was deemed "uneconomical to operate" by the Park Service, but protests associated with its demolition caused the Park Service to re-examine its policies concerning lodges in other parks, contributing to their preservation.

There are two well advertised hiking trails in the monument, and a campsite near the canyon rim.

In 2006, Iron County officials considered a proposal for legislation to expand the monument and rename it Cedar Breaks National Park. The new park would include the adjacent Ashdown Gorge Wilderness, some private land and nearby Flanigan Arch.

All content from Kiddle encyclopedia articles (including the article images and facts) can be freely used under Attribution-ShareAlike license, unless stated otherwise. Cite this article:
Cedar Breaks National Monument Facts for Kids. Kiddle Encyclopedia.