The violet-green swallow (Tachycineta thalassina) is a small North American passerine bird in the swallow family. These aerial insectivores are distributed along the west coast from Alaska to Mexico, extending as far east as Montana and Texas. With an appearance very similar to the tree swallow, these individuals can be identified by the white rump side-patches that appear to separate their green back and purple tail. Violet-green swallows are secondary cavity nesters, found in a number of habitats including deciduous and coniferous forest. In addition to nesting in tree holes within these habitats, they are also widely observed nesting in the cracks of large cliffs. 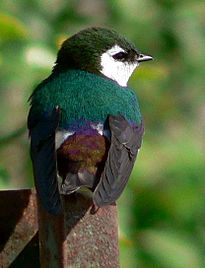 Back and rump details 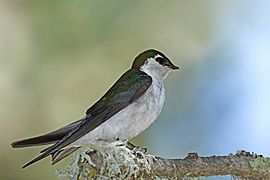 The violet-green swallow gets its name from the colouration on its back and rump. The species is best identified by the glossy green on the top of the head and back as well as hints of purple on the nape, rump and upper tail. Below the green back, the remainder of the wing is a grayish-bronze. Similar to other swallows, T. thalassina is white below, but differs in that the white continues onto rump side-patches that almost meet at the base of the tail. These white rump side-patches sometimes look like one continuous stripe when in flight. White also extends onto the cheeks, partially surrounding the eye. The notch in the tail of the violet-green swallow is slightly shallower than that of the tree swallow, but deeper than the relatively flat tail of the cliff swallow. 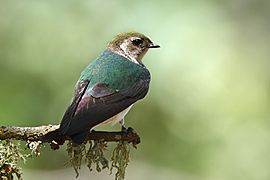 Violet-green swallows exhibit very little sexual dimorphism, with adult males simply showing brighter colours than adult females. Additionally, the white cheeks are not as prominent and the head is more bronze than green on the female. Juveniles are not as easily identifiable compared to adults due to their dull colouration. Similar to other juvenile swallows, especially the tree swallow, the juvenile violet-green swallow is white below and grayish-brown above. However, the more gradual change in colour and visible (but slightly reduced) white cheek patches can help identify juvenile individuals of the species.

The swallows have been well studied ecologically, but only recently has their phylogeny been thoroughly researched. Swallows are passerine birds grouped within the family Hirundinidae. The family Hirundinidae is split into two subfamilies: Pseudochelidoninae, which contains two species of river martins, and Hirundininae, comprising all other martins and swallows. The 82 species within the subfamily Hirundininae are further classified into three groupings: the mud nesters, basal relicts and core martins, with the violet-green swallow falling into the latter. Violet-green swallows are one of 9 species of New World tree swallows within the genus Tachycineta. This genus is a monophyletic group and is considered the sister taxa of all other New World swallows. 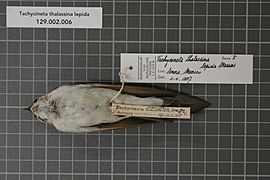 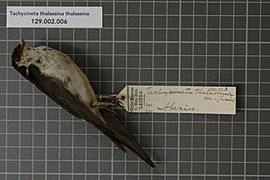 Violet-green swallows are important members of the Tachycineta clade due to their large geographic range and because they are one of 2 species that breed within North America. It is agreed upon that Tachycineta is split into a North and South American clade, but the phylogenetic placement within the genus depends on the type of analysis used. The violet-green swallow is a member of the North American grouping, along with T. bicolor (the North American tree swallow), T. euchrysea (the golden swallow of Hispaniola and Jamaica) and T. cyaneoviridis (the Bahama swallow). A mitochondrial genome analysis has placed T. thalassina as a sister taxon of the Caribbean swallows, T. euchrysea and T. cyaneoviridis, with all 3 species forming a sister clade to T. bicolor. Nuclear genome analyses and a consensus of both methods have reorganized this North American clade, alternating the closest sister taxon of T. thalassina between T. cyaneoviridis and T. euchrysea. Nonetheless, the taxonomy of the violet-green swallow is well understood up to the genus level, after which some uncertainty surrounds the placement of T. thalassina within the North American clade of the genus Tachycineta.

Violet-green swallows are divided into three subspecies, T. t. thalassina, T. t. brachyptera and T. t. lepida differing in breeding ranges and wing length. T. t. thalassina has slightly longer wings and has been known to breed as far north as Alaska, while the shorter winged T. t. brachyptera breeds further south in California and Mexico. Not all of the literature agrees upon T. t. lepida as a 3rd subspecies, and little information is available to help distinguish it from other subspecies.

Hybridization has been known to occur among the swallows, with a few cases involving violet-green swallows being reported. Breeding between violet-green swallows and both tree and barn swallows has been recorded on separate occasions, but resulting offspring were not observed. In 2000, the strange plumage of a swallow seen in British Columbia, Canada suggested the possible successful hybridization of a violet-green and cliff swallow. Nonetheless, these observations are rare hence why minimal research has looked into swallow hybridization. 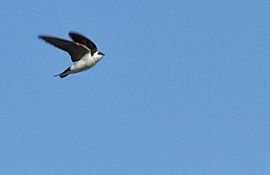 A violet-green swallow in flight

The type of habitat occupied by violet-green swallows varies depending on their geographical location and elevation. Across their range, these birds can be found in deciduous, coniferous and mixed forests, as well as within canyons and in close proximity to large cliffs. Breeding and non-breeding habitats do not differ much except that breeding habitat is usually at lower elevations. Violet-green swallows have also been observed nesting around buildings in more settled areas.

Violet-green swallows are a predominantly western species, with the rare sighting of individuals in eastern North America. The distribution of the species can be divided based on the recognized subspecies, but the entire range spans from central Alaska down to Mexico. Longitudinally, the range borders the west coast of Alaska, British Columbia and the United States, and extends eastward into southwestern Alberta, Montana, the Dakotas and Texas. The breeding range spans almost the entire distribution, while the winter range is restricted to Mexico. 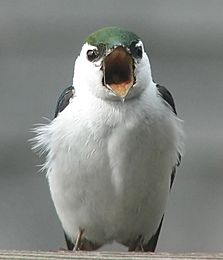 There are many knowledge gaps surrounding the vocalization behaviour of violet-green swallows. These gaps include vocalizations made during early development, alarm calls and the daily pattern of calls. The little information available suggests two main classes of vocalizations, the chee-chee calls and twitter calls.

This call is most commonly heard when one violet-green swallow interacts with another swallow, either during foraging, in-flight chases or when approaching a nesting site. Flocks of swallows have been recorded making chee-chee calls, suggesting its use in social cohesion. Juveniles have also been observed making this vocalization when waiting to be fed by an adult, implying that it plays a role in parent-juvenile recognition.

Observations of violet-green swallows making twitter calls typically associate the vocalization with courtship displays and the establishment of new territories. Twitter calls have only been heard in flight, either by a male escorting a female or during brief intraspecific territorial disputes. Mixing of the two calls occurs occasionally, but little ecological research can explain its use. 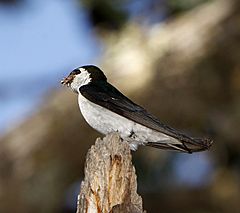 Violet-green swallow with a beak full of insects 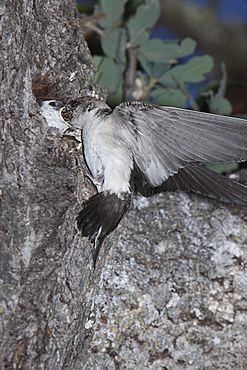 Similar to other swallows, violet-green swallows are specialized aerial insectivores, catching and eating their prey while in flight. However, they have been known to feed higher in the sky than most other swallows. The examination of the stomach contents of multiple individuals has presented a wide range of diet items, including insects like ants, beetles and flies as well as other arthropods such as spiders. On rare occurrences these birds have been observed foraging along the ground, but such events represent exceptions to their typical feeding habits.

Violet-green swallows will usually arrive to their breeding area weeks prior to the start of reproduction. Location dependent, copulation takes place mid-May with the eggs being laid by the start of June, followed by a couple weeks of incubation before hatching. The average clutch size is 5 eggs, with females laying approximately 1 per day. During the weeks post-hatching, their parents feed the young as they slowly begin to grow their feathers. After approximately 3 weeks the young are ready to leave the nest. It is more common for pairs to reproduce once per breeding season, but a second brooding has been observed on occasion.

Violet-green swallows have been observed cooperating and competing with various avian species, including western bluebirds. A similar field observation notes a violet-green swallow laying an egg in an active bluebird nest box. Initially, the male bluebird attempted to drive the swallow from the nest cavity, while the female bluebird did not seem concerned with the intruder. It appeared the bluebirds tolerated the act of egg-dumping by the violet-green swallow, but the observer returned the following day to find the newly laid egg smashed below the nest. This behaviour suggests that when unable to access her original nest after physiologically committing to laying her egg, a female violet-green swallow may participate in interspecific egg-dumping. 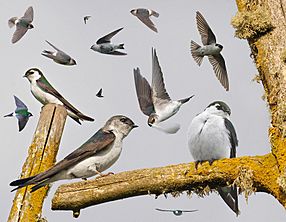 Multiple accounts of violet-green swallows forming cooperative relationships with other species have been recorded. From 1981 to 1982, three independent swallow pairs were observed co-occupying the nest boxes of western bluebirds. These violet-green swallows protected the nesting site, removed fecal sacs from the boxes and fed the bluebird fledglings with no resistance from the adult western bluebirds. Despite too small of a sample size to hold statistical significance, fledgling survival was greater when violet-green swallows provided active care. It is believed that the swallows benefit from the cooperative relationship by inheriting the nest box after the bluebird parents and fledglings have left. 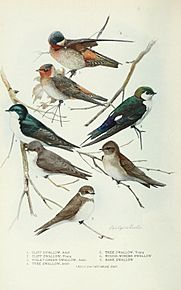 A comparison of five species of swallows 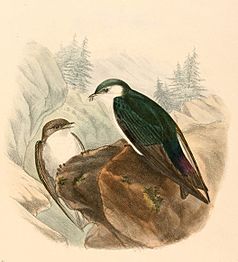 An 1894 drawing of a male and female violet-green swallow

It has been speculated that certain birds, including swallows, enter a state of torpidity during harsh winter conditions. Few observations of this decrease in body temperature and metabolic rate have been recorded in violet-green swallows, the first case occurring in 1965 near Death Valley National Monument in Saratoga Springs, California. Field observers noted 3 “dead” individuals on the east-facing slope of a dune the morning after a cold and windy night. Upon closer observation, the violet-green swallows made minor movements, such as opening their eyes, but did not struggle while being handled. The physical appearance of the swallows, including the position of their head in relation to the slope and the fluffing of their feathers was similar to that of other birds in torpor. Despite the lack of thermometers, it was apparent these 3 individuals were in a state of hypothermia for about 45 minutes after the sun began to rise. Eventually the 3 swallows awkwardly flew off, signifying the end of their torpor bout.

In addition to reaching borderline hypothermic temperatures during bouts of torpor, violet-green swallows have been observed behaving similar to hyperthermic individuals while sunbathing. Indications of this activity include the orientation of their wings and tail, their trance-like state and the occasional loss of balance. Research has shown that increasing feather temperatures during basking can control ectoparasites. The period of sunbathing in violet-green swallows is short and dependent on ambient temperature and wind velocity, but typically occurs after an increase in parasite loads near the end of nesting.

All content from Kiddle encyclopedia articles (including the article images and facts) can be freely used under Attribution-ShareAlike license, unless stated otherwise. Cite this article:
Violet-green swallow Facts for Kids. Kiddle Encyclopedia.