South Fork is a statutory town in Rio Grande County, Colorado, United States. It lies at the confluence of the South Fork and Rio Grande rivers. The population was 604 at the 2000 census.

According to the United States Census Bureau, the town has a total area of 2.4 square miles (6.2 km2), all land.

South Fork was once the site of timber milling operations.

South Fork was founded in 1882, by which date its location was already marked by the presence of a coaching post dating from the construction of the railroad connection of the Rio Grande Western Railroad line to Creede which had been built to support the Creede silver mine. It was only in 1992 that South Fork achieved independent statutory town status, making it the youngest statutory town in the state. Originally the principal economic activities involved forestry and mining, but in recent decades these have been overtaken in the employment statistics by tourism.

On June 21, 2013, a wildfire burning 6 miles (9.7 km) from the town prompted mandatory evacuations for all South Fork residents. Firefighters initially said the fire would likely consume the town. In subsequent days it was reported that the town probably would not burn, although the fire came as close as 1.5 miles (2.4 km) from the town. 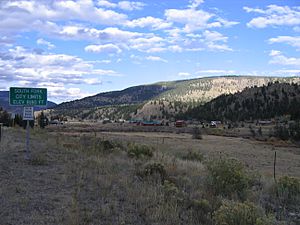 Housing on the outskirts of town

South Fork has about 600 permanent residents, but a substantially larger summer population due to seasonal residents and visitors.

There were 274 households out of which 25.5% had children under the age of 18 living with them, 58.0% were married couples living together, 8.8% had a female householder with no husband present, and 31.4% were non-families. 27.7% of all households were made up of individuals and 7.3% had someone living alone who was 65 years of age or older. The average household size was 2.20 and the average family size was 2.63.

In the 1983 movie National Lampoon's Vacation starring Chevy Chase as Clark Griswold, the Griswold family spend the night at a camping ground in South Fork.

All content from Kiddle encyclopedia articles (including the article images and facts) can be freely used under Attribution-ShareAlike license, unless stated otherwise. Cite this article:
South Fork, Colorado Facts for Kids. Kiddle Encyclopedia.