The historic City of Creede is the Statutory Town that is the county seat and the only incorporated municipality in Mineral County, Colorado, United States. The town population was 290 at the 2010 United States Census. 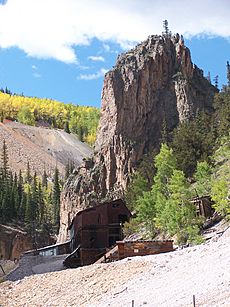 Old mine on the Bachelor Loop historic driving tour [1] 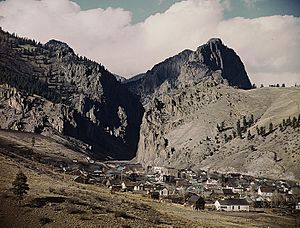 Creede in 1942, photo by Andreas Feininger

Travelers to this area appeared in the early 19th century. Tom Boggs, a brother-in-law of Kit Carson, farmed at Wagon Wheel Gap in the summer of 1840. The first silver discovery was made at the Alpha mine in 1869, but the silver could not be extracted at a profit from the complex ores. Ranchers and homesteaders moved in when stagecoach stations (linking the mining operations over the Divide with the east) were built in the 1870s, but the great “Boom Days” started with the discovery of rich minerals in Willow Creek Canyon in 1889.

Creede was the last silver boom town in Colorado in the 19th century. The town leapt from a population of 600 in 1889 to more than 10,000 people in December 1891. The Creede mines operated continuously from 1890 until 1985, and were served by the Denver & Rio Grande Railroad.

The original townsite of Creede was located on East Willow Creek just above its junction with West Willow Creek. Below Creede were Stringtown, Jimtown, and Amethyst. The Willow Creek site was soon renamed Creede after Nicholas C. Creede who discovered the Holy Moses Mine. Soon the entire town area from East Willow to Amethyst was called Creede.

At the same time that Creede was booming, the capital city of Denver, Colorado was experiencing a major legal reform movement against gambling clubs and saloons. Numerous owners of major gambling houses in Denver quickly relocated to Creede's business district. One of these relocators was the infamous confidence man Jefferson Randolph "Soapy" Smith. Soapy became the uncrowned king of Creede's criminal underworld, and opened the Orleans Club. Other famous people in Creede were Robert Ford (the man who killed outlaw Jesse James), Bat Masterson, and William Sidney "Cap" Light (the first deputy sheriff in Creede, and brother-in-law of Soapy Smith). On June 5, 1892 a major fire destroyed most of the business district. Three days later, on June 8, Ed O'Kelley walked into Robert Ford's makeshift tent-saloon and shot him dead. The town of Creede was incorporated on June 13, 1892, but the anti-gambling reform movement in Denver had ceased, and the Denver businessmen moved back to their old stomping grounds. 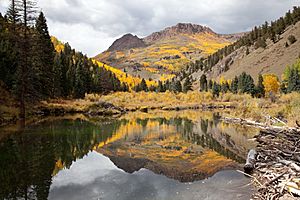 The river has played a critical role in the development of farming and ranching in the Valley. The Rio Grande and its tributary trout streams provide excellent opportunities for fly fishermen and its unspoiled headwaters in the Weminuche Wilderness are a favorite for hikers.

There were 181 households out of which 19.3% had children under the age of 18 living with them, 46.4% were married couples living together, 8.8% had a female householder with no husband present, and 41.4% were non-families. 33.1% of all households were made up of individuals and 12.2% had someone living alone who was 65 years of age or older. The average household size was 2.08 and the average family size was 2.70.

The gambler Poker Alice lived for a time in Creede as well as several other locations in Colorado.

In the 1976 film The Shootist, terminally ill gun fighter J.B. Books (portrayed by John Wayne) relates that he had just seen a "sawbones" (slang for a doctor or surgeon) in Creede when questioned about his symptoms.

The final scene in the 2007 drama The Assassination of Jesse James by the Coward Robert Ford (as well as the real-life event it depicts) takes place in a saloon in Creede, where Robert Ford (played by Casey Affleck) is gunned down by Edward O'Kelley 10 years after Ford killed Jesse James (portrayed by Brad Pitt). The scene itself was shot on a $1 million set in Alberta that recreated much of 19th century Creede.

Scenes from the action Western film Lone Ranger (2013 film), starring Armie Hammer and Johnny Depp and directed by Gore Verbinski, were filmed in locations in and around Creede. The Train Scene was filmed on trains belonging to Creede Railroad Company.

All content from Kiddle encyclopedia articles (including the article images and facts) can be freely used under Attribution-ShareAlike license, unless stated otherwise. Cite this article:
Creede, Colorado Facts for Kids. Kiddle Encyclopedia.