Rocky Top (formerly Coal Creek and Lake City) is a city in Anderson and Campbell counties in the eastern part of the U.S. state of Tennessee, northwest of Knoxville. The population was 1,781 at the 2010 census. Most of the community is in Anderson County and is included in the Knoxville Metropolitan Statistical Area. On June 26, 2014, the city officially changed its name from Lake City to Rocky Top, after a last-ditch effort by the copyright owners of the song "Rocky Top" was denied by a federal court. 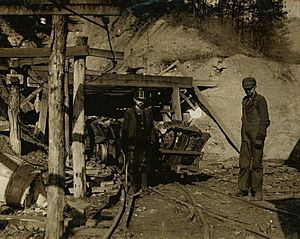 The town was originally named Coal Creek when it was founded in the early 19th century, after the 1798 Treaty of Tellico opened the area to settlement, taking its name from the stream that runs through the town. Coal Creek and the nearby town of Briceville were the site of a major lockout of coal miners in 1891, which resulted in the town of Coal Creek being occupied by the state militia for over a year after miners attempted to force an end to the use of unpaid convict labor in the mines. This labor struggle, known as the Coal Creek War, was eventually resolved in the coal miners' favor with the abolition of Tennessee's convict labor program. The Fraterville Mine disaster of 1902 occurred nearby, in the village of Fraterville.

The name "Lake City" was adopted in 1936 after the completion of nearby Norris Dam formed an artificial lake above the dam. Some area residents, including the nonprofit Coal Creek Watershed Foundation, have urged a return to the old name of "Coal Creek" to commemorate the community's heritage.

In 2013, a business group proposed to establish a theme park in the city if the city name was changed to "Rocky Top" to take advantage of the song of that name. On November 7, 2013, Lake City's city council voted to ask the Tennessee General Assembly to amend the city charter to adopt the proposed name. The House of Bryant, which owns the copyright to the song, as well as multiple trademarks and copyrights associated with it, has objected to the name change, asserting that it would violate intellectual property rights. On May 29, U.S. District Judge Thomas A. Varlan denied the House of Bryant's request for an preliminary injunction, holding that renaming the town was not likely to be deemed to be a use in commerce as required for trademark infringement.

On June 26, 2014, the city officially changed its name, after Varlan denied a last-minute attempt by House of Bryant to prevent the vote. House of Bryant's appeal is pending before the Sixth Circuit Court of Appeals.

Rocky Top is located in northern Anderson County, and is the northern terminus of U.S. Route 441. Interstate 75 serves the city with two exits and leads south 24 miles (39 km) to Knoxville and north 32 miles (51 km) to the Kentucky state line at Jellico, Tennessee.

According to the United States Census Bureau, Rocky Top has a total area of 1.6 square miles (4.1 km2), all land.

There were 815 households, out of which 27.9% had children under the age of 18 living with them, 38.7% were married couples living together, 16.9% had a female householder with no husband present, and 40.4% were non-families. 37.3% of all households were made up of individuals, and 19.5% had someone living alone who was 65 years of age or older. The average household size was 2.17 and the average family size was 2.84.

Norris Dam State Park is located near Rocky Top. It has a Rocky Top address.

All content from Kiddle encyclopedia articles (including the article images and facts) can be freely used under Attribution-ShareAlike license, unless stated otherwise. Cite this article:
Rocky Top, Tennessee Facts for Kids. Kiddle Encyclopedia.