Mena ( MEE-nə) is a city in Polk County, Arkansas, United States. It is also the county seat of Polk County. The population was 5,637 as of 2000 census.

Mena is included in the Ark-La-Tex socio-economic region. Surrounded by the Ouachita National Forest, Mena is a gateway to some of the most visited tourist attractions in Arkansas. 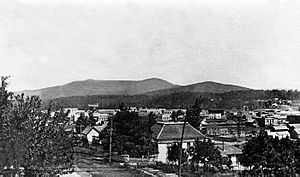 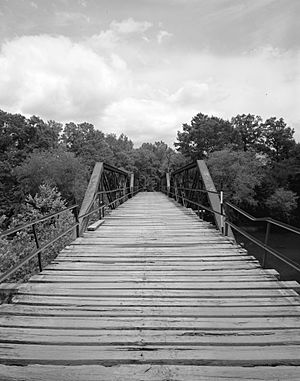 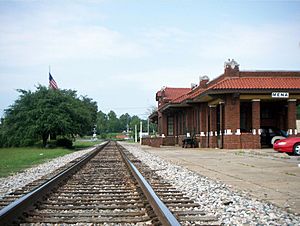 Mena was founded by Arthur Edward Stilwell during the building of the Kansas City, Pittsburg and Gulf Railroad (now the Kansas City Southern), which stretched from Kansas City, Missouri to Port Arthur, Texas. Train service to Mena began in 1896.

Stilwell named the town in honor of Folmina Margaretha Janssen-De Goeijen, the wife of his friend and financier Jan De Goeijen, whom Mr. De Goeijen affectionately called Mena. Janssen Park in the center of Mena is also named for her.

In 1897, the Bank of Mena was founded. The following year, the county seat was moved from nearby Dallas, Arkansas to Mena.

The town's main industries were timber, agriculture and mineral extraction, though it was advertised as a spa city located within a healthy environment.

Stilwell donated land to the city in 1906, and a park and campground were constructed.

In 1910, the railroad moved its shop facilities from Mena to Heavener, Oklahoma, causing a loss of 800 jobs.

A private school in Mena, Hendrix Academy, closed in 1905.

In 1911, a damaging tornado struck the town.

A black community called Little Africa developed on Board Camp Creek east of Mena. The community was small, with a population of 152 in 1900.

In 1901, a black man there was killed after an alleged altercation with a white girl. No one was arrested for the crime. Several other instances of racially motivated hate and violence towards Mena's black community had been noted. This, combined with declining job prospects after the railway shops left town, led many blacks to leave Mena. By 1910, just 16 remained.

In the 1950s, a government program to stockpile manganese led to the reopening of local mines closed since the 1890s. The program ended in 1959, and the mines again closed.

During the 1980s, drug smuggler Barry Seal moved his operations to the Mena Intermountain Municipal Airport, where he owned and operated many planes and helicopters, as well as advanced radar equipment.

On April 9, 2009, a large and violent tornado devastated the town, killing three and injuring 30. Many homes and businesses were damaged or destroyed. The Arkansas National Guard was deployed to the affected area. The tornado was rated as a high-end EF3, with winds near 165 mph (266 km/h), and damages estimated at $25 million.

Some of the businesses in the creative economy are working to create a Downtown Arts District in Mena, anchored by the Mena Art Gallery at 607 Mena Street. The gallery is a non-profit organization which exhibits about 12 shows a year ranging from invitational (a well-known artist is invited to display his or her work in the gallery for approximately 30 days) to open shows featuring primarily local artists in a variety of media. There is also an annual Children's Exhibit and a High School Exhibit. Admission is free. The gallery has one part-time director and is staffed primarily by volunteers.

Mena's climate is characterized by hot, humid summers and generally mild to cool winters, with precipitation occurring in all seasons. The Köppen Climate Classification subtype for this climate is "Cfa" (Humid Subtropical Climate). 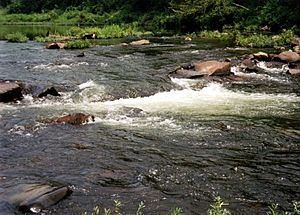 The Cossatot River begins in the Ouachita Mountains and runs southeast of Mena through Polk County.

An estimated 1.2 million visitors each year come to Mena to enjoy its nearby natural features, which include the Talimena Scenic Drive, a National Scenic Byway, and the Queen Wilhelmina State Park. The Cossatot River is included in the National Wild and Scenic Rivers System and runs through the Ouachita National Forest. Lake Ouachita, and the Black Fork Mountain Wilderness, are also nearby.

Camp Pioneer is 163 acres (0.66 km2) Boy Scout camp in the foothills of the Ouachita Mountains east of Mena. Camp High Point, a Girl Scout camp is also in the area.

Mena is home of the Mena Gaming Association charity youth organization, founded in 2003.

In 1996, Patrick Matrisciana, founder of Jeremiah Films and an organization called Citizens for an Honest Government, produced Obstruction of Justice: The Mena Connection.

All content from Kiddle encyclopedia articles (including the article images and facts) can be freely used under Attribution-ShareAlike license, unless stated otherwise. Cite this article:
Mena, Arkansas Facts for Kids. Kiddle Encyclopedia.