Kids Encyclopedia Facts
This page is about the census-designated place in Douglas County, Nevada. For the unincorporated community of Clark County, Nevada formerly known as "State Line", see Primm, Nevada.

Stateline is a census-designated place (CDP) on the east shore of Lake Tahoe in Douglas County, Nevada, United States. The population was 842 at the 2010 census. The population swells considerably during the busy winter and summer seasons, due to the high number of hotel rooms and rental accommodations available.

Many of the hotels in the neighboring town of South Lake Tahoe, California organize buses to take residents to the casinos in Stateline. Stateline and South Lake Tahoe are effectively one town, with the state line intersecting with U.S. Route 50 immediately after the Harrah's and Harvey's casinos.

Another well-known feature of Stateline is Kingsbury Grade, which runs up and over a mountain pass, rising from Lake Tahoe and dropping down to Gardnerville on the other side. Most of Stateline's residential and seasonal accommodation, amenities and services are located on or near Kingsbury Grade. The route can be difficult in the winter months and snow chains are essential during this time. Larger vehicles are required to allow traffic to pass when five or more vehicles are queueing behind them. 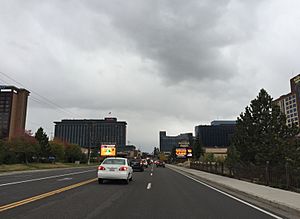 An express bus runs from the Stateline casinos to Reno-Tahoe International Airport, with adult fares at $29.75 / $53 for one-way / return journeys, available at any casino front desk. Those producing local ID qualify for a 20% discount. A shuttle also runs a circuit from the casinos up Kingsbury Grade and back for a $5 single fare. Seasonal shuttles operate to the ski resorts and casinos from South Lake Tahoe.

There were 510 households out of which 25.7% had children under the age of 18 living with them, 33.7% were married couples living together, 7.3% had a female householder with no husband present, and 51.8% were non-families. 36.3% of all households were made up of individuals and 9.2% had someone living alone who was 65 years of age or older. The average household size was 2.38 and the average family size was 3.24.

All content from Kiddle encyclopedia articles (including the article images and facts) can be freely used under Attribution-ShareAlike license, unless stated otherwise. Cite this article:
Stateline, Nevada Facts for Kids. Kiddle Encyclopedia.