Abraham Lincoln Birthplace National Historical Park is a designated U.S. historic park preserving two separate farm sites in LaRue County, Kentucky, where Abraham Lincoln was born and lived early in his childhood. He was born at the Sinking Spring site south of Hodgenville and remained there until the family moved to the Knob Creek Farm northeast of Hodgenville when he was two years old, living there until he was seven years of age. The park's visitor center is located at the Sinking Spring site.

In the late fall of 1808, Thomas and Nancy Lincoln settled on Sinking Spring Farm. Two months later on February 12, 1809, Abraham Lincoln was born there in a one-room log cabin. Today this site bears the address of 2995 Lincoln Farm Road, Hodgenville, Kentucky. A cabin, symbolic of the one in which Lincoln was born, is preserved within a 1911 neoclassical memorial building at the site.

Also on the property is the privately owned Nancy Lincoln Inn, as well as a park visitor center.

A Beaux-Arts neo-classical Memorial Building was designed by John Russell Pope for the birthplace site. On February 12, 1909, the centennial of Abraham Lincoln's birth, the cornerstone was laid by President Theodore Roosevelt and the building was dedicated on November 9, 1911, by President William Howard Taft. Almost a hundred years after Thomas Lincoln moved from Sinking Spring Farm, a similar log cabin was placed inside the Memorial Building. The Memorial Building features 16 windows, 16 rosettes on the ceiling, and 16 fence poles, representing Lincoln being the 16th president. The 56 steps leading up to the building entrance represent his age at his death. 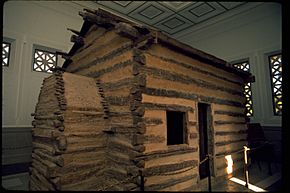 The original log cabin that Lincoln was reputed to have been born in was dismantled sometime before 1865. Local tradition held that some of the logs from the cabin were used in construction of a nearby house. New York businessman Alfred W. Dennett purchased the Lincoln farm in November 1894 and used the logs from this house to construct a cabin similar in appearance to the original cabin where Lincoln was born. Soon the cabin was dismantled and re-erected for exhibition in many cities. Eventually the logs for this cabin, along with logs incorrectly reputed to have belonged to Jefferson Davis' birthplace and possibly a third cabin, were purchased by the Lincoln Farm Association or (LFA), which believed they had acquired only Lincoln logs. When workers tried to reconstruct the cabin, they discovered the problem. The LFA bought a one-room cabin similar to the one reconstructed by Dennett. When the last rebuilt cabin was placed in the Memorial Building, its size made visitor circulation difficult. The LFA reduced the cabin's size from 16-by-18 feet to 12-by-17 feet.

Today, historians recognize that the former claim that these logs were from Lincoln's birth cabin was essentially inaccurate. In his book It All Started With Columbus, satirical writer Richard Armour stated that Lincoln had been born in three states and also "in two cabins - the original, and the reconstructed." 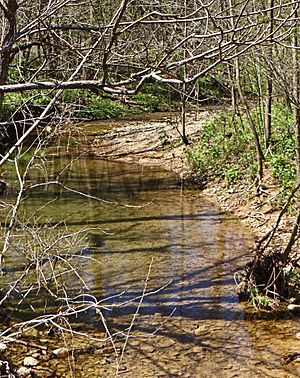 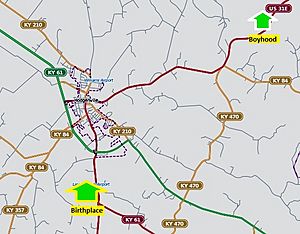 Lincoln lived at Sinking Spring until he was two years old, before moving with his family to another farm a few miles to the northeast along Knob Creek, near present-day U.S. Highway 31E, where he lived until the age of seven.

The Knob Creek site was added to the park in November 2001 after the Larue County Fiscal Court purchased it through the Office of Kentucky Nature Preserves' Kentucky Heritage Land Conservation Fund. It features a 19th-century log cabin and a historic 20th century tavern and tourist site. The log cabin is not original to the site, but may have belonged to neighbors of the Lincolns. It was moved to the approximate location of the Lincolns' home. One of Abraham Lincoln's earliest memories was his near drowning in Knob Creek, and being saved by the neighbor's son.

Lincoln lived here until the age of seven, when his family moved to Indiana, to the site now commemorated as the Lincoln Boyhood National Memorial. 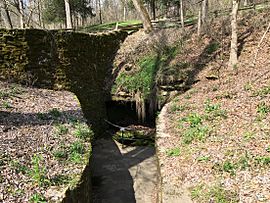 The spring the farm was named after.

The Sinking Spring site, which contains the 1911 memorial, has a visitor center museum, theater and bookstore. The Knob Creek site has interpretive staff during certain days in summer months. Both sites have hiking and picnic areas.

All content from Kiddle encyclopedia articles (including the article images and facts) can be freely used under Attribution-ShareAlike license, unless stated otherwise. Cite this article:
Abraham Lincoln Birthplace National Historical Park Facts for Kids. Kiddle Encyclopedia.