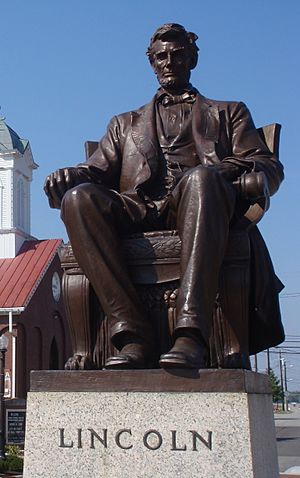 The statue was the result of the Lincoln Monument Commission under the direction of Otis M. Mather, chairman. The Kentucky General Assembly commissioned the Commission in 1904. It was built to commemorate the centennial of Abraham Lincoln's birth, which occurred a few miles south of Hodgenville on February 12, 1809. It was the Commission that decided to place the statue in Hodgenville's public square. Funding for the bronze statue was done by $10,000 from the United States Congress, $5,000 from the Kentucky General Assembly, and the rest from the residents of LaRue County, Kentucky.

The official dedication was on May 31, 1909. Lincoln's son Robert Todd Lincoln was at the ceremony, and Lincoln's sister-in-law Mrs. Ben Hardin Helm did the unveiling. Henry Watterson was the principal speaker. The statue was officially accepted for the commonwealth of Kentucky by Kentucky governor Augustus E. Willson. Over 10,000 people witnessed the ceremony.

The 6 feet (1.8 m) tall bronze statue features Lincoln sitting in an Empire style chair on a marble foundation. Stars are inlaid on a Greek fret band on the marble foundation. "Lincoln" is spelled out in bronze letters on the statue's eastern facade. A replica of the statue is at the University of Wisconsin–Madison.

Robert Todd Lincoln on June 2, 1909, wrote a letter thanking Otis Mather for constructing the statue in his father's honor.

It was placed on the National Register of Historic Places on January 10, 1991.

All content from Kiddle encyclopedia articles (including the article images and facts) can be freely used under Attribution-ShareAlike license, unless stated otherwise. Cite this article:
Statue of Abraham Lincoln (Hodgenville, Kentucky) Facts for Kids. Kiddle Encyclopedia.