Celina is a city in and the county seat of Clay County, Tennessee, United States. The population was 1,495 at the 2010 census.

Celina was founded in the 19th century and named after the daughter of local pioneer entrepreneur and educator, Moses Fisk. In the late 19th century, Celina prospered as a logging town, receiving logs that had been cut in the forests to the east and floated down the Obey River.

Celina is located near the center of Clay County at 36°32′54″N 85°30′7″W﻿ / ﻿36.54833°N 85.50194°W﻿ / 36.54833; -85.50194 (36.548379, -85.501980). The city is situated in a relatively broad valley surrounded by rugged hills characteristic of the eastern Highland Rim. This valley is created by the confluence of the Cumberland River, which approaches from the north, and the Obey River, which approaches from the east. This section of both rivers is part of Cordell Hull Lake, a reservoir created by Cordell Hull Dam near Carthage several miles to the southwest. Dale Hollow Dam, which creates the vast Dale Hollow Lake, lies along the Obey River just east of Celina.

Tennessee State Route 52 passes through the city, connecting it with Red Boiling Springs and Lafayette to the west and Livingston to the southeast. Tennessee State Route 53, which intersects SR 52 in the southern part of Celina, runs southwestward down the Cumberland River to Gainesboro, and northeastward to the Kentucky border, where it continues as Kentucky Route 61 in the direction of Burkesville.

The climate in this area is characterized by hot, humid summers and generally mild to cool winters. According to the Köppen Climate Classification system, Celina has a humid subtropical climate, abbreviated "Cfa" on climate maps. 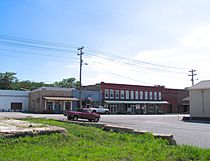 There were 645 households out of which 23.9% had children under the age of 18 living with them, 38.0% were married couples living together, 16.0% had a female householder with no husband present, and 40.6% were non-families. 36.7% of all households were made up of individuals and 17.8% had someone living alone who was 65 years of age or older. The average household size was 2.12 and the average family size was 2.75.

All content from Kiddle encyclopedia articles (including the article images and facts) can be freely used under Attribution-ShareAlike license, unless stated otherwise. Cite this article:
Celina, Tennessee Facts for Kids. Kiddle Encyclopedia.