Lewes ( loo-iss) is an incorporated city on the Delaware Bay in eastern Sussex County, Delaware, United States. According to the 2010 census, the population is 2,747. Along with neighboring Rehoboth Beach, Lewes is one of the principal cities of Delaware's rapidly growing Cape Region. The city lies within the Salisbury, Maryland–Delaware Metropolitan Statistical Area. Lewes proudly claims to be "The First Town in The First State."

Lewes was the site of the first European settlement in Delaware, a whaling and trading post that Dutch settlers founded on June 3, 1631 and named Zwaanendael (Swan Valley). The colony had a short existence, as a local tribe of Lenape Native Americans wiped out the 32 settlers in 1632.

The area remained rather neglected by the Dutch until, under the threat of annexation from the English colony of Maryland, the city of Amsterdam made a grant of land at the Hoernkills (the area around Cape Henlopen, near the current town of Lewes) to a group of Mennonites for settlement in 1662. A total of 35 men were to be included in the settlement, led by a Pieter Cornelisz Plockhoy of Zierikzee and funded by a sizable loan from the city to get them established. The settlement was established in 1663, but the timing of the settlement was terrible: In 1664, the English wrested New Netherland from the Dutch, and they had the settlement destroyed with British reports indicating that “not even a nail” was left there.

The area was slow to resettle, but a new settlement gradually regrew around the Hoernkills. In late December 1673, when the area was briefly held again by the Dutch, the settlement was attacked and burned down again by soldiers from the English colony of Maryland. In 1680, under the authority of James Stuart, Duke of York, who had been granted such authority by his brother, King Charles II, the village (and county) was reorganized and known for two years as New Deale, Deale County, Delaware. A log courthouse was authorized to be built at this time. A Church of England congregation was established by 1681 and a Presbyterian church was built in 1682.

In 1682, the Delaware colonies were given to William Penn by English King Charles II in payment of a family debt. When Penn arrived in the New World later that year, he renamed the county as Sussex and the Hoernkills settlement as Lewes, in commemoration of sites back in England. Lewes became and remained the county seat of Sussex County until 1791, when it was moved to a more west-central county location, the current town of Georgetown.

On April 5 and 6, 1813, during the War of 1812, British naval vessels led by HMS Poictiers under the command of Captain Sir John Beresford briefly and ineffectually bombarded the town. A cannonball from the bombardment is lodged in the foundation of Cannonball House, which now serves as the town's maritime museum.

Lewes was incorporated by an act of the state assembly on Feb. 2, 1818. The act provided for five persons to be chosen as commissioners to be known as "Trustees of the Town of Lewes."

Lewes Beach itself was an important stop on the Underground Railroad in the years leading up to the American Civil War. As a "border state," Delaware was not part of the Confederacy, but was still quite dangerous for fugitive slaves. Several houses in Lewes thus housed escaping slaves; these "safe houses" were identified by the residents placing a single candle in the top window of the house.

In 1941, the United States built Fort Miles on Cape Henlopen, immediately south of Lewes, to defend Delaware Bay and the Delaware River and the oil refineries and factories on its shores, as well as the city of Philadelphia. It was one of the largest and most heavily armed coastal fortifications ever built.

Fort Miles never saw any major action; except for range practice, it fired its guns only once between its establishment and the end of World War II. Fort Miles ceased operation altogether in 1991 and was deeded to the State of Delaware. 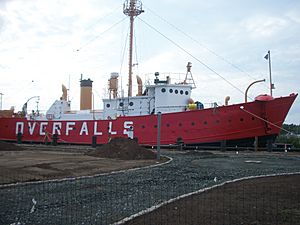 Six men who served as Delaware governor were born in or made their home in Lewes. Three of the men lived on Lewes' Second Street. Brothers Daniel and Caleb Rodney, descendants of Caesar Rodney each served as governor of Delaware. Each a member of the Federalist party, Daniel served from 1814–1817 while Caleb served as acting governor from 1822–1823. Ebe Walters Tunnell moved to Lewes in 1873 to enter the drug and hardware business in part of the old Caleb Rodney House on Second Street. Tunnell worked his way up the state government hierarchy before unsuccessfully running for governor in 1892. Four years later, the Democrat won the election, and served from 1897–1901.

As Lewes was the earliest settlement in the state, and Delaware was the first state to ratify the Constitution, the town refers to itself as "The First Town in the First State." Lewes is named after the town of Lewes in England, which is situated in a county named Sussex (from which Sussex County, Delaware, takes its name). Lewes, Sussex, England, also has the same seal. 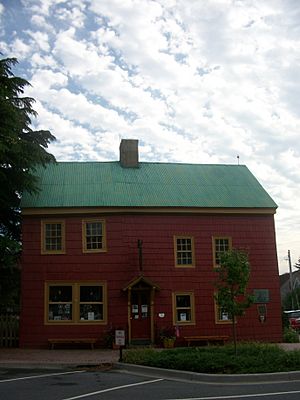 Situated on the Atlantic Coastal Plain, Lewes's weather is moderated by the Atlantic Ocean and the Delaware Bay. Lewes has a mild subtropical climate consisting of hot, humid summers and mild winters. The average daytime high in July is 87 °F (30.6 °C) and a low of 70 °F (21 °C); in January, the average high is 45 °F (7 °C) with an average low of 30 °F (-1 °C) The month of highest average rainfall is July with 4.78 inches of rain, while February is historically the driest month, receiving an average of only 3.23 inches (80.5 mm) of rain. 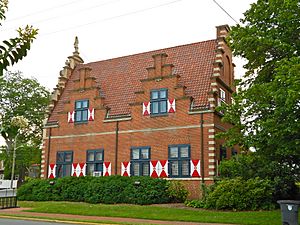 Based on the Statenlogement building in Hoorn, the Netherlands, used as a women's club starting 1930, now the Zwaanendael Museum

Lewes serves as a vacation and resort spot popular with residents of Washington, D.C., and the surrounding suburbs. Even though the city limits primarily sit on the lower reach of the Delaware Bay, it is nonetheless considered an ocean resort, particularly as the ocean is nearby at Cape Henlopen. Lewes is among those communities which have banned smoking in its public parks.

Lewes is the home of the Zwaanendael Museum, which features exhibits about Delaware's history. Savannah, Second and Front Streets are the town's main streets and have many shops, restaurants, parks and historical venues. Fisherman's Wharf is a dock that stretches along the Lewes and Rehoboth Canal. It features multiple restaurants and bait shops, and in season the dock hosts hundreds of boats from all over. 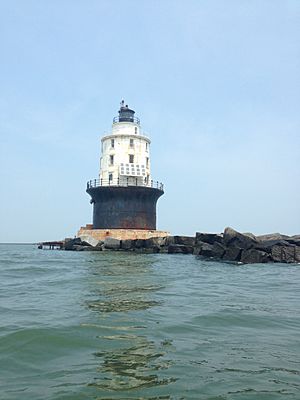 Lighthouse in the National Harbor of Refuge

United States Lightship Overfalls (LV-118/WAL-539), one of nine surviving lightships at museums in the United States, is moored in Lewes along the Lewes and Rehoboth Canal 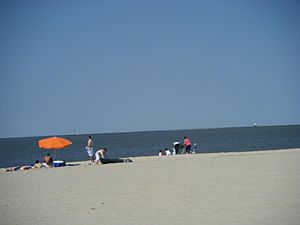 Lewes Beach on the Delaware Bay

DNREC maintains a boat ramp just outside the city limits along the Broadkill River, adjacent to the Roosevelt Inlet. 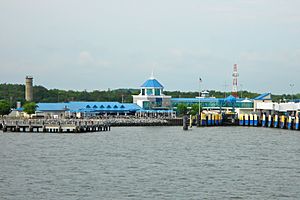 The Lewes terminal of the Cape May–Lewes Ferry

Delaware Route 1 (DE 1) passes just outside city limits at Five Points where DE 1, U.S. Route 9 (US 9), DE 404, DE 23 and DE 1D (Plantation Road) intersect. There are three main arterial roads that connect Lewes to DE 1: New Road, Savannah Road (US 9 Business) and King's Highway (US 9). US 9 passes to the southeast of the city on the Theodore C. Freeman Memorial Highway. Parking meters are in effect for on-street parking and parking lots in the downtown area between May 1 and October 14 and at parking lots at Lewes Beach between May 1 and September 30.

The southern terminus of the Cape May–Lewes Ferry is located in Lewes. The ferry provides passenger and automobile ferry service between southern Delaware and southern New Jersey, crossing the Delaware Bay to North Cape May, New Jersey, and serves as part of US 9. The ferry crossing is 17 miles (27 km) long and takes 85 minutes. Cape Water Tours & Taxi operates a round-trip water taxi service between Lewes and Dewey Beach via the Lewes and Rehoboth Canal on Friday evenings in the summer months, offering access to dining and nightlife in Dewey Beach.

DART First State operates the Lewes Transit Center park and ride just outside Lewes along DE 1. The transit center serves local bus routes providing service across Sussex County, with expanded Beach Bus service to the Delaware Beaches in the summer months, and inter-county bus service to other part of Delaware. This park and ride serves the Route 201 bus to the Rehoboth Beach Boardwalk, the Route 203 bus to Dewey Beach, the Route 204 bus which heads along Savannah Road into Lewes to Cape Henlopen Drive and the Cape May–Lewes Ferry terminal, and the Route 206 bus to Georgetown. The Route 305 "Beach Connection" bus provides service on weekends and holidays in the summer to the Lewes Transit Center Park and Ride from Wilmington, the Christiana Mall, Middletown, Dover, and Frederica, with service continuing south to Rehoboth Beach. The Route 307 bus provides year-round service to Milford, Frederica, and Dover. The Delaware Department of Transportation built the Lewes Transit Center Park and Ride, with groundbreaking taking place on March 9, 2016 and the park and ride opening in May 2017. The Delaware River and Bay Authority operates a shuttle bus route in the summer months that connects the Cape May–Lewes Ferry to the Tanger Outlets and Rehoboth Beach.

Lewes was served by a branch of the Delaware Coast Line Railroad that originated in Georgetown, whereupon transfers could be made to trains north to Dover and Wilmington. Passenger trains operated on this branch by its predecessor company, the Pennsylvania Railroad, but ended between 1936 and 1938. The Maryland, Delaware & Virginia Railway operated a passenger train route from Lewes that followed a path to the north of the DCL route. It followed a path through Milton, Ellendale, Greenwood, crossing the state border into Maryland, then continuing further west to Love Point, whereupon travelers would connect with a ferry to Baltimore. This service was replaced by bus service by early 1932.

A rail with trail known as the Georgetown-Lewes Trail opened along the railroad line on October 19, 2016, with future plans to extend the trail to Georgetown. In 2017, it was announced the Delaware Coast Line Railroad would be abandoned between Cool Spring and Lewes after the swing bridge over the Lewes and Rehoboth Canal was closed due to being structurally unsound and repairs were determined to be too costly. The Junction and Breakwater Trail is a rail trail for bicyclists and hikers that connects Lewes and Rehoboth Beach, running 6 miles (9.7 km) mostly along a former Penn Central Railroad right-of-way. 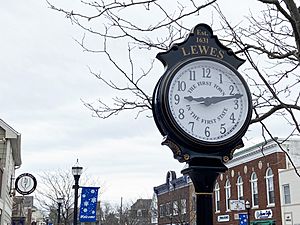 The Lewes Board of Public Works (BPW) provides electricity, water, and sewer service to the city. The BPW was established by an act of the Delaware General Assembly on March 15, 1901. Lewes formerly had a power plant that generated electricity for the city, but the plant's usage was reduced as the city brought in power from outside and the plant was shut down in the 1970s due to rising fuel costs. Lewes currently purchases power from Constellation which is transmitted to the city over Delmarva Power lines. The BPW is a member of the Delaware Municipal Electric Corporation. Trash collection is provided by the city while recycling collection is provided under contract by Republic Services. Natural gas service in Lewes is provided by Chesapeake Utilities. 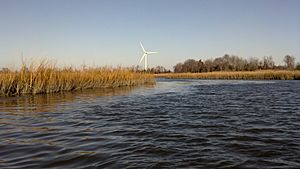 Sussex Consortium, a school for students with autism previously in the former Lewes School, is now in an unincorporated area with a Lewes address.

The University of Delaware's Hugh R. Sharp Campus is also within the city. This is home to the University's College of Earth, Ocean, and Environment.

Lewes students are also eligible to enter Sussex Academy of Arts and Sciences, which is not in the city but is in the nearby city of Georgetown.

The Lewes School first opened as a multi-grade school in 1921 and became Lewes High School by 1946. It initially held Cape Henlopen High School when it opened in 1969. Lewes School will be repurposed as the new Richard A. Shields Elementary.

All content from Kiddle encyclopedia articles (including the article images and facts) can be freely used under Attribution-ShareAlike license, unless stated otherwise. Cite this article:
Lewes, Delaware Facts for Kids. Kiddle Encyclopedia.