Georgetown is a town in and the county seat of Sussex County, Delaware, United States. According to the 2010 census, the population of the town is 6,422, an increase of 38.3% over the previous decade.

Georgetown is part of the Salisbury, Maryland-Delaware Metropolitan Statistical Area.

Lewes, sited on the Delaware Bay, was designated as the first county seat. It was the first colony in Delaware, founded by the Dutch in 1631, and it remained the only significant European settlement in the region for some time. When English colonists William Penn organized the three southern counties of Pennsylvania, which are now Delaware, Lewes was the natural choice for the location of the Sussex County's Seat of Justice.

Sussex County was not well defined until after 1760, following resolution of a dispute between William Penn's family and Frederick Calvert, 6th Baron Baltimore after intervention from the Crown. This dispute over borders had delayed discussion over the location of a county seat. Earlier Charles Calvert, 5th Baron Baltimore had argued that the county ended with Lewes, while Penn's sons stated it continued into Fenwick Island, which it now does. The Mason–Dixon line was surveyed as part the agreement between the Penns and Lord Baltimore, and it has since defined the western and southern border of the county. Georgetown, located more centrally in the county, was later designated as its seat for court.

Lewes continued to serve as the county seat throughout much of the 18th century, although it was inconvenient for the growing population to the west; some persons had to travel more than a day over the poor roads to reach the town to conduct county business. After petitioning by western citizens of the county to the Delaware General Assembly, a law was passed on January 29, 1791, to centralize the location of the county seat. At the time, the land in central Sussex County was for the most part swampy and uninhabited. The county government hired ten commissioners to purchase land, build a courthouse and jail, and sell lots in an area at "James Pettyjohn's old field or about a mile from where Ebenezer Pettyjohn now lives," as the original order states, to encourage related development.

On May 9, 1791, the commissioners, under the leadership of the Delaware State Senator George Mitchell, purchased 76 acres (308,000 m²) for a townsite. Commissioner Rhodes Shankland began the survey by laying out "a spacious square of 100 yards each way." Eventually Georgetown was laid out in a circle one mile in diameter and centered around the original square surveyed by Shankland. The area within this circle is now listed as a historic district on the National Register of Historic Places. The new location proved better as an administrative center; Georgetown is still said to be "sixteen miles from everywhere" in Sussex County.

The County Courthouse and Jail were built in the southeastern section of the town circle. Given this progress, the Seat of Justice was officially moved on October 26, 1791. The new community was named Georgetown in honor of the lead commissioner George Mitchell. Lots, measuring 60 by 120-foot, were surveyed and sold to give a return to the State's investment.

Because of Delaware's status as a border state during the Civil War, men enlisted on both sides of the war, with some fighting for the Union and others for the Confederates. The town and even some of its prominent families were divided by these split loyalties.

In 2007, a monument commemorating Sussex County Confederates was constructed and installed at the Marvel Museum in Georgetown.

Since the turn of the 21st century, a major employer is Perdue Farms, which has a large chicken processing plant. It has attracted numerous immigrants from Haiti and Guatemala as workers, stimulating growth of the population and changing the town's demographics. Georgetown has a more diverse population than might be expected in a small Delaware inland town. Many residents speak Haitian French or Creole, while others have a primary language of Spanish, in addition to those whose first language is English. In 2000 slightly more than one-third of the population was ethnic Hispanic and one-fifth was African American (including Haitians).

Georgetown is the home of WZBH radio and the Georgetown Speedway. The latter attracts attendees from miles around during race season.

Every two years, Georgetown hosts Return Day, a half-day-long parade and festival two days after Election Day. It stems from colonial days, when the public would congregate in Georgetown two days after the election to hear the results (because it would take that long to deliver the results to the courthouse by horseback from the state capital in Dover, Delaware). The winners of that year's elections parade in horse-drawn carriages around The Circle. Together with the losers and the chairs of the county's political parties, they ceremonially "bury the hatchet" in a tub of sand. The afternoon of Return Day is a holiday for county and state workers in Sussex County. The day's events are marked by a traditional ox feast, and the beginning of the next round of campaigns.

Georgetown is unusual among Delaware municipalities as the town was constructed around a circle, instead of the more traditional park square. Located at "The Circle" are the Town Hall, state and county buildings, and the historic Sussex County Courthouse. The original Courthouse was replaced by the current structure, which was built in 1837 on South Bedford Street. It was restored in 1976 and is managed by the Georgetown Historical Society. Lawyers' offices, stores, a bank, and the Brick Hotel, which has recently completed renovation, also line the Circle. This layout is similar to that found in Annapolis, Maryland. The center of Georgetown's circle is a small green park with a fountain. Georgetown's oldest church, St. Paul’s Episcopal Church, was constructed in 1844 and remodeled in 1881 in the early Victorian Gothic style; its congregation organized in 1794, shortly after the close of the American Revolutionary War. It is listed on the National Register of Historic Places (NRHP).

According to the United States Census Bureau, the town has a total area of 4.1 square miles (11 km2), all of it land.

In 2000, 21.6% of Georgetown residents identified as being of Guatemalan heritage. This was the highest percentage of Guatemalan Americans in any place in the country. 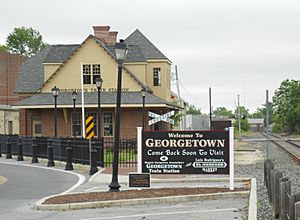 The main north–south road in Georgetown is US 113, which passes through the western part of town on Dupont Boulevard and heads south to Millsboro and Pocomoke City, Maryland and north to Milford, where it connects to DE 1 that heads north to Dover and Wilmington. US 9 runs southwest–northeast through Georgetown on Market Street, heading southwest to Laurel and northeast to Lewes and the Cape May–Lewes Ferry across the Delaware Bay. DE 18 begins at US 9 at The Circle in the center of Georgetown and heads northwest on Bedford Street before heading west toward Bridgeville. DE 404 passes through Georgetown as part of a route linking the Baltimore-Washington Metropolitan Area and the Chesapeake Bay Bridge to the Delaware Beaches, entering town from the west concurrent with DE 18 to The Circle, where it joins US 9 and heads northeast along with that route toward the beaches. US 9 Truck and DE 404 Truck provide a bypass of Georgetown to the south for truck traffic. Parking in portions of downtown Georgetown near the Sussex County Courthouse are regulated by two-hour parking meters on weekdays.

The Delaware Coastal Airport is located to the east of Georgetown, offering general aviation. The nearest airport with commercial air service is the Wicomico Regional Airport in Salisbury, Maryland.

Until the late 1940s, the Pennsylvania Railroad operated passenger trains from Harrington, Delaware through Georgetown along the train line of the former Delaware, Maryland and Virginia Railroad (DMV). Travellers from New York or Philadelphia could take trains to Wilmington, whereupon they would take a train to Harrington for the DMV line train. The route continued south to Berlin, Maryland (near Ocean City, Maryland) and to Franklin City, Virginia.

All content from Kiddle encyclopedia articles (including the article images and facts) can be freely used under Attribution-ShareAlike license, unless stated otherwise. Cite this article:
Georgetown, Delaware Facts for Kids. Kiddle Encyclopedia.