Laurel is a town in Sussex County, Delaware, United States. The population was 3,708 at the time of the 2010 census. Laurel is part of the Salisbury, Maryland-Delaware Metropolitan Statistical Area. It once hosted the Laurel Blue Hens of the Eastern Shore Baseball League.

The site of the town of Laurel was a Nanticoke Indian settlement known as Broad Creek Town during most of the eighteenth century. Its Nanticoke name is unknown. The Indian settlement was created on tracts known as Bachelor's Delight and Greenland in 1711 when the government of Maryland, who originally claimed this part of Delaware, set aside land for the Nanticoke Indians. Nearly all the Indian settlers left within 50 years, relocating to western Pennsylvania. The present town was laid out along the Broad Creek in the 1790s and was named for the laurel bushes that grew alongside the creek.

On August 13, 2011, the District 3 All-Stars from Laurel won the Senior League Softball World Series for Little League, going undefeated in the tournament and defeating Puerto Rico in the championship game by a score of 2–0.

The Laurel Blue Hens were a member of the minor league Eastern Shore League in 1922 and 1923, playing at League Park.

It is within the Laurel School District. Laurel High School is the local high school. 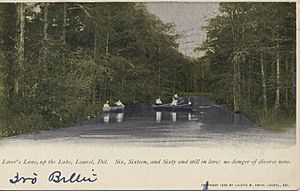 All content from Kiddle encyclopedia articles (including the article images and facts) can be freely used under Attribution-ShareAlike license, unless stated otherwise. Cite this article:
Laurel, Delaware Facts for Kids. Kiddle Encyclopedia.