Delmar is a town in Sussex County, Delaware, United States, on the Maryland border along the Transpeninsular Line. Its motto is "The Little Town Too Big for One State." The population was 1,597 at the 2010 census, an increase of 13.5% over the previous decade. It is part of the Salisbury, Maryland-Delaware Metropolitan Statistical Area and a suburb of Salisbury, MD. When added with "twin city" Delmar, Maryland, the total population of the town was 4,600 at the 2010 Census.

The Town of Delmar was founded in October 1859 with the extension of the Delaware Railroad to the southern boundary of Delaware. The Transpeninsular Line was responsible for the founding of this unique bi-state town because the Charter of the Delaware Railroad Company permitted only the building of a railroad within the State of Delaware and the charter of the corresponding railroad company in Maryland permitted only the laying of railroad track within the State of Maryland. Thus, in 1859, the two respective railroads met and the town of Delmar was born. The name is a portmanteau of the states whose border this railroad center straddles - Delaware and Maryland.

The Town of Delmar grew slowly until 1884 when the New York, Philadelphia and Norfolk Railroad Co. completed a railroad from Pocomoke City, Maryland to Cape Charles, Virginia and also established a ferry service across the Chesapeake Bay between Cape Charles and Norfolk, Virginia. These new developments immediately made the Delmarva Peninsula an important link between the north and south. The Town of Delmar, being the midway town of the Delmarva Peninsula and already a railroad terminal, was the point for trains to change crews and locomotives and also a center for maintenance of the rolling equipment. As a result of these developments, a tremendous influx of experienced railroad men moved into the community and considerable extra employment was furnished for local townspeople. During this accelerated rapid growth period, Delmar became a "boom town". New dwelling units sprang up all over town and new businesses were established to meet the demands of its growing population. By 1889, the population of the Town of Delmar had increased to 680 and was still growing.

In 1888, the Town of Delmar, Maryland was granted a charter by the General Assembly of Maryland. An examination of this charter and the laws of Maryland fails to reveal any mention of the twin town of Delmar, Delaware. Therefore, it could be assumed that up until this time there was very little cooperation between halves of the Town of Delmar. The Town of Delmar was almost entirely destroyed by fire in 1892 and again in 1901. The first fire destroyed everything in its path over a ten-acre (40,000 m²) area and the second major fire was almost as destructive. In each instance, the Town of Delmar was rebuilt and continued as a flourishing town. The first indication of any cooperation between Delmar, Maryland and Delmar, Delaware came in 1924 when surveys were conducted for a possible sewerage system for the entire Town of Delmar. The construction of the sewerage system in 1927 was considered the first joint project between the two towns in that the law provided that both towns would maintain the outfall sewer with Maryland paying the expenses and billing the Delaware side one-half of all costs. 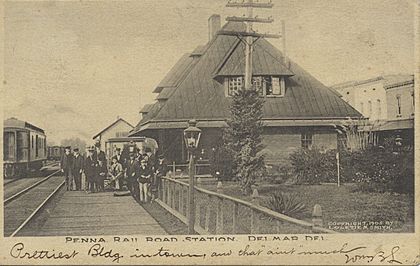 The biggest push towards abolishing the jurisdictional, legal effects of the State line came when the Lions Club voted to sponsor a project for the consolidation of the two school systems in the town. Since the town was founded, each side had its own individual school with the one in Delaware operating under the local School Board and the Maryland School operating under the Wicomico County Board of Education. This very controversial issue was bitterly contested for over three years and finally in 1949, this dream became a reality when the junior and senior high schools were consolidated into one school using the Delaware facilities. Four years later the fourth, fifth and sixth grades were also consolidated with classes in the Maryland school. This controversial decision represented one of the greatest steps forward educationally for the town of Delmar and also towards eliminating the jurisdictional barrier between the two parts of town.

The Dickerson Potato House, Highball Signal, and West Potato House are listed on the National Register of Historic Places.

All content from Kiddle encyclopedia articles (including the article images and facts) can be freely used under Attribution-ShareAlike license, unless stated otherwise. Cite this article:
Delmar, Delaware Facts for Kids. Kiddle Encyclopedia.