Kids Encyclopedia Facts
This page is about the town. For the headland or cape, see Cape Charles (headland).

Cape Charles is a town / municipal corporation in Northampton County, Virginia, United States. The population was 1,009 as of the 2010 Census.

Cape Charles, located close to the mouth of the Chesapeake Bay, on Virginia's Eastern Shore, was founded in 1884 as a planned community by railroad and ferry interests. Historian William G. Thomas writes, "At a cost of nearly $300,000, the N.Y., P. & N. was dredging a new harbor out of a large fresh-water lagoon between King's and Old Plantation creeks in lower Northampton County, and Scott planned to develop a new town around it called Cape Charles City. The appellation "City" for any place on the Eastern Shore was romantic, a vision of the future that the railroad might make possible....In 1890 the Corps of Engineers dredged the harbor basin, its entrance, and a channel through Cherrystone Inlet and built stone jetties protecting the harbor outlet. By 1912 the Corps estimated that Cape Charles harbor handled 2,500,000 tons of freight a year." 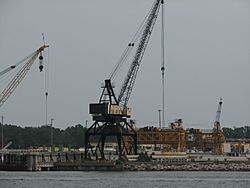 The Cape Charles Historic District and Stratton Manor are listed on the National Register of Historic Places.

There were 536 households, out of which 21.1% had children under the age of 18 living with them, 30.4% were married couples living together, 19.6% had a female householder with no husband present, and 48.1% were non-families. 43.7% of all households were made up of individuals, and 26.3% had someone living alone who was 65 years of age or older. The average household size was 2.11 and the average family size was 2.91.

All content from Kiddle encyclopedia articles (including the article images and facts) can be freely used under Attribution-ShareAlike license, unless stated otherwise. Cite this article:
Cape Charles, Virginia Facts for Kids. Kiddle Encyclopedia.