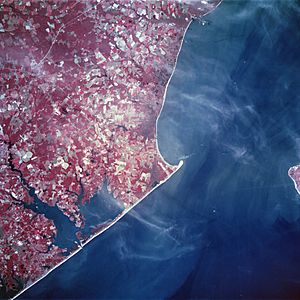 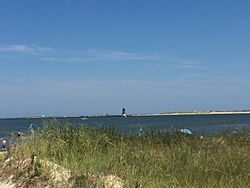 Cape Henlopen, originally spelled Cape Hinlopen (after its namesake Thijmen Jacobsz Hinlopen who was a prominent Dutch trader), was New Netherland's most southern border on the 37th parallel north.

In 1620, Thijmen Jacobsz Hinlopen became the business partner (1620) of Cornelis Jacobsen Mey in the now washed out Cape Cornelius and the incorrectly spelled Cape May with the ships Blijde Boodschap (en. "Joyful Message") and Bever both of which focused on exploration and trade with the Indians on the Delaware River (then Zuidt Rivier).

The area between the 38th and 40th parallels (i.e., the Delaware Bay area) as well as the Delaware River from north to south had previously been surveyed and charted by Cornelis Hendricksz from Monnikendam on the ship "Onrust" in 1614, 1615 and 1616. From August until November 1616, the New Netherland Company, which had an exclusive trading patent for the New Netherland territory between 40° and 45° latitude, had tried unsuccessfully to obtain an exclusive patent from the States General of the Dutch Republic for the territory between 38° and 40° latitude.

Cornelis Jacobsz Mey was also unable to trade in the South River (Delaware River) at the exclusion of competing Dutch companies. Those Dutch companies came in conflict with one another but were eventually able to reach agreement in New Netherland. Discord arose again which was settled, finally, by a judgment of arbitrators at Amsterdam on December 23, 1623. The 38th and 39th parallels region came under the final jurisdiction of the Dutch West India Company on behalf of the States General with the delivery of the first settlers to Governors Island in New Netherland in 1624. Those settlers were subsequently spread out onto Verhulsten Island (Burlington Island) in the Delaware, at Fort Orange (now Albany) in the Hudson River and at the mouth of the Connecticut River in order to finalize the claim to New Netherland as a North American province according to the Hugo Grotius Law of Nations (? year).

In 1782 during the American Revolutionary War, the young Continental Navy Lieutenant Joshua Barney fought with a British squadron at Cape May and Delaware Bay. Barney's force of three sloops defeated a Royal Navy frigate, a sloop-of-war and a Loyalist privateer. The battle ended with the loss of two British vessels and one American sloop. 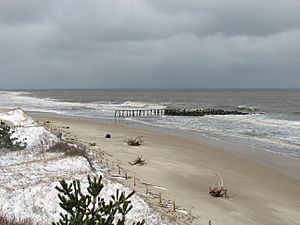 Cape Henlopen State Park is a 5,193 acre (21 km²) Delaware state park on Cape Henlopen in Sussex County, Delaware, in the United States. William Penn made the beaches of Cape Henlopen one of the first public lands established in what has become the United States in 1682 with the declaration that Cape Henlopen would be for "the usage of the citizens of Lewes and Sussex County." Cape Henlopen State Park has a 24-hour and year-round fishing pier as well as campgrounds. The remainder of the park is only open from sunrise to sunset, and includes a bathhouse on the Atlantic Ocean, an area for surf-fishing, a disc golf course, and bicycle lanes, walking paths, and a World War II-era watchtower which is open to the public. The beach at Herring Point is also a popular surfing spot.

Camp Henlopen serves as the Eastern terminus for the American Discovery Trail, the only coast to coast hiking trail in the United States.

National Harbor of Refuge, outer breakwater off Cape Henlopen. All metal, built in 1926 and automated in 1973. Maintained by US Coast Guard. Visible from Cape May-Lewes Ferry.

All content from Kiddle encyclopedia articles (including the article images and facts) can be freely used under Attribution-ShareAlike license, unless stated otherwise. Cite this article:
Cape Henlopen Facts for Kids. Kiddle Encyclopedia.