Oakridge is a city in Lane County, Oregon, United States. The population was 3,205 as of the 2010 census. It is located east of Westfir on Oregon Route 58, about 40 miles (64 km) east of Eugene and 150 miles (240 km) southeast of Portland. Surrounded by the Willamette National Forest and the Cascade Range, Oakridge is popular with outdoor enthusiasts for its hiking, mountain biking, wildflowers, fly fishing, birding, watersports, and nearby Willamette Pass Resort.

The city was originally a community called "Hazeldell", and its post office was established on July 26, 1888. When a station on the Southern Pacific Railroad opened in May 1912, it was named "Oak Ridge" by a railroad executive for the surrounding topography, and on July 19 of that year the name was changed to "Oakridge".

The economy of Oakridge and nearby Westfir has been centered on the railroad, the logging industry, and recreation. In the 20th century, there were two sawmills that processed logs from nearby timberland—an Oakridge mill owned by the Pope and Talbot Lumber Company and an Edward Hines mill in Westfir. Both of the mills had closed by 1985, and the local economy declined. Since then it has been slowly rebounding, with a new general store opening in 2010, a bakery in 2011, and a brewery and mercantile. 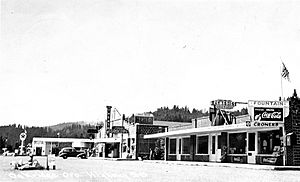 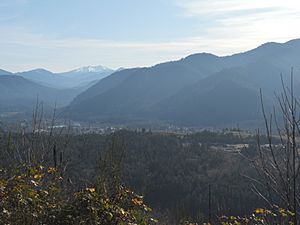 Oakridge as seen from the north, along the North Fork Trail, with snow-capped Diamond Peak in the distance

The area now known as Oakridge was first explored in 1852 as a possible route for pioneers coming from Central Oregon to the Willamette Valley. A post office was named "Hazeldell" in 1888, and the place's name later changed to "Big Prairie", and then "Oak Ridge". In 1912, a new community was formed and officially named Oakridge. Since its beginnings as a mountain ranch, Oakridge has been a railroad boomtown, a lumberjacks' haven, and an outdoor enthusiast's destination.

The early boom for Oakridge can be attributed to the Southern Pacific Railroad. By 1910, work had already begun on Tunnel 22, a short route connecting Oakridge to the area now known as Westfir. Oakridge was a station on Southern Pacific's Cascade subdivision, a line that goes over Willamette Pass via the Natron Cutoff that was built in 1926, and the railroad played an integral part of the economy and lifestyle in Oakridge. The Union Pacific Railroad still operates the rails and trains are a common sight in Oakridge.

On July 2, 1946, the Pope and Talbot Lumber Company purchased timberland near Oakridge. By 1948, the company had built a large sawmill and had begun a massive timber logging operation. While the railroad and Westfir's Hines sawmill began to slow down, the Pope and Talbot mill expanded and eventually employed more than 500 people. The combined economic base of the railroad and sawmills accounted for the population growth of the 1960s and 1970s, when the community of Willamette City was consolidated into Oakridge. However, in 1978, the Hines mill in Westfir closed, and by 1985 the Pope and Talbot Mill had laid off all of its workers. The City of Oakridge now owns the property that formerly housed the Pope and Talbot sawmill.

Oakridge lies in a small valley in the foothills of the Cascade Range and is completely surrounded by the Willamette National Forest. Five streams are located in and around Oakridge; they are Salmon Creek, Salt Creek, Hills Creek, and the Middle and North forks of the Willamette River, the latter of which has been designated Wild and Scenic. Diamond Peak, a shield volcano located in the nearby Diamond Peak Wilderness to the southeast, can be seen from various spots in and around Oakridge. Waldo Lake, known as one of the purest lakes in the world, and Salt Creek Falls, one of the largest waterfalls in Oregon, are located about 20 miles (32 km) east of town.

This region experiences warm (but not hot) and dry summers, with no average monthly temperatures above 71.6 °F (22.0 °C). According to the Köppen Climate Classification system, Oakridge has a warm-summer Mediterranean climate, abbreviated "Csb" on climate maps.

There were 1,437 households of which about 24% had children under the age of 18 living with them, about 42% were married couples living together, about 11% had a female householder with no husband present, about 6% had a male householder with no wife present, and about 41% were non-families. About 34% of all households were made up of individuals and about 16% had someone living alone who was 65 years of age or older. The average household size was about 2.2 and the average family size was about 2.8. 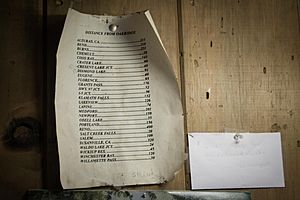 State Highway 58, a designated freight route, serves as a major connection between Highway 97 and Interstate 5. Running east-west, Highway 58 links the Willamette Valley with Central Oregon while crossing through the Willamette National Forest and Cascade Range. 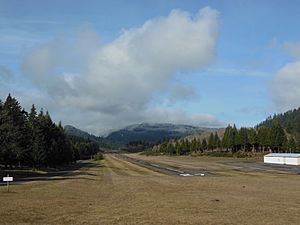 All content from Kiddle encyclopedia articles (including the article images and facts) can be freely used under Attribution-ShareAlike license, unless stated otherwise. Cite this article:
Oakridge, Oregon Facts for Kids. Kiddle Encyclopedia.