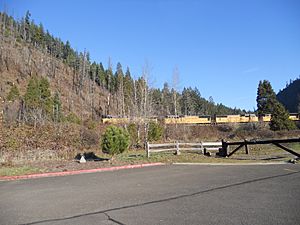 A locomotive on the Union Pacific Railroad passing by Westfir

Westfir is a city in Lane County, Oregon, United States. The population was 253 at the 2010 census. It is located about 40 miles (64 km) southeast of Eugene and about 4 miles (6 km) west of Oakridge in the Willamette National Forest.

The name Westfir was first used for the community in July 1923. The name came from the Western Lumber Company, which produced Douglas-fir lumber and had established Westfir as a company town. A major customer of the mill at this time was the Southern Pacific Railroad, which was building its line over Willamette Pass between Eugene and Klamath Falls in the 1920s and passing through Westfir. Westfir post office was established in November 1923. The population in 1931 was 500. The Western Lumber sawmill was later sold to the Westfir Lumber Company and in 1946 to the Edward Hines Lumber Company. Hines established a plywood mill in Westfir in 1952. In 1977, Hines closed the mills and sold the entire town, including the water and sewer system. The town's new owners wanted the utilities to be in public ownership, so local residents voted to incorporate in 1979. The mill operations closed in 1984, after a series of fires.

Oregon's longest existing covered bridge, the Office Bridge, was built across the North Fork Middle Fork Willamette River in 1944 to connect the Westfir Lumber Company mill to the main office.

According to the United States Census Bureau, the city has a total area of 0.33 square miles (0.85 km2), all of it land.

This region experiences warm (but not hot) and dry summers, with no average monthly temperatures above 71.6 °F. According to the Köppen Climate Classification system, Westfir has a warm-summer Mediterranean climate, abbreviated "Csb" on climate maps.

There were 114 households, of which 18.4% had children under the age of 18 living with them, 47.4% were married couples living together, 8.8% had a female householder with no husband present, 8.8% had a male householder with no wife present, and 35.1% were non-families. 29.8% of all households were made up of individuals, and 7% had someone living alone who was 65 years of age or older. The average household size was 2.22 and the average family size was 2.70.

The three largest employers in the Westfir area are the Oakridge School District, Armstrong Wood Products, and Oakridge Sand & Gravel.

Westfir students are served by the Oakridge School District, which has an elementary, middle, and high school in Oakridge. Westfir Middle School closed in 2006, after serving for a time as the district's middle school. The Westfir school district merged with the Oakridge school district in 1967.

All content from Kiddle encyclopedia articles (including the article images and facts) can be freely used under Attribution-ShareAlike license, unless stated otherwise. Cite this article:
Westfir, Oregon Facts for Kids. Kiddle Encyclopedia.