Lake Almanor is a large reservoir in northwestern Plumas County, northeastern California. The reservoir has a capacity of 1,308,000 acre feet (1.613×109 m3) and a maximum depth of about 90 feet. It is formed by Canyon Dam on the North Fork of the Feather River, as well as Benner and Last Chance Creeks, Hamilton Branch, and various natural springs.

The dam is 130 feet tall and composed of hydraulic fill. 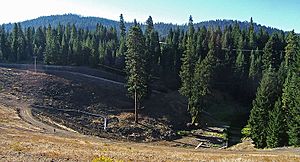 The first dam was completed by Great Western Power in 1914 as part of the Upper North Fork Feather River Project, damming the North Fork of the Feather River and flooding the meadow-filled valley generally known as Nakam Koyo/Big Meadows/Big Springs, a longstanding Yamani Maidu village site. When the dam was built, Maidu families still living in the vicinity were displaced while parts of the town of Prattville had to be moved to higher ground, leaving multiple structures flooded over. The reservoir was named for the three daughters of Guy C. Earl, Vice President of Great Western Power: Alice, Martha and Eleanor. The present dam, which more than doubled the size was constructed by Great Western Power from 1926 to 1927.

The dam is now owned by Pacific Gas and Electric Company. PG&E uses it for hydroelectricity production, but the lake is also a popular recreation area, with fishing, boating, water skiing, swimming and camping available. 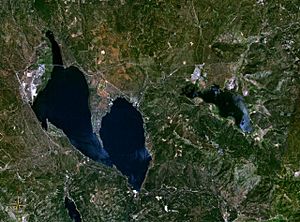 The lake-front and immediate surroundings are, either officially or unofficially, divided into a series of regions:

Much of the southern shore of the lake is in the Lassen National Forest, so recreation management is shared by PG&E and the United States Forest Service.

Large areas along the northern shore of the lake are seasonal pasture used for summer and fall cattle grazing; some areas of these grazing grounds are under-water in wetter years. The wetlands at the north end also serve as breeding grounds for a variety of migratory waterfowl, most prominently Canada geese and various species of ducks including mallard, teal, and wigeon. Other large birds to be viewed around the lake are heron, osprey, and occasionally bald eagles, which nest on the Peninsula and West Shore. Each year in late June and early July, large insect hatches occur on the lake during the dusk hours. The insects, which the fish feed on, attract local fly fisherman who use imitation flies to catch the feeding fish.

The Almanor Basin Watershed Advisory Committee Group (ABWAC) received funding for a Watershed Assessment Project under California Prop 12, and one deliverable from this project was in an online map-based database of watershed information that runs in Google Earth - download the tour at: http://www.sierrainstitute.us/Almanorvirtualtour.html

PG&E's 50 year license to use the waters of Lake Almanor were set to expire in 2004 when the state water board explored requests to install a thermal curtain at the bottom of Lake Almanor to control the temperature of the rivers downstream. This was ostensibly to create better habitat for trout habitat up to 40 miles downtsream. However, residents near Lake Almanor became concerned that the curtain would help the trout downstream at the cost of raising the water temperatures of shallow Lake Almanor and harming its fish population. By doing so the residents would not have easy access to the lakes fish population.

There is no powerhouse at the dam. Image of the Outlet tower to the Butt Valley Powerhouse tunnel near Prattville A tunnel (and finally a penstock) from the powerhouse outlet tower, in the lake between Prattville and the Plumas Pines Resort, delivers water to the Butt Valley Powerhouse at the north end of Butt Valley Reservoir, which has a capacity of 41 MW. From there, the water is sent by tunnel to either the Caribou 1 (74 MW) or Caribou 2 (120 MW) powerhouses. Caribou 2 is favored because it is newer and more efficient. Their tailraces flow into Belden Reservoir. A portion of the water goes through the 1.3-MW Oak Flat Powerhouse, which is located at the bottom on Belden Dam. The rest goes to the 125-MW Belden Powerhouse by another tunnel. The water is then released into Rock Creek Reservoir. All of these powerhouse facilities are presently (2008) owned and operated by the Pacific Gas and Electric Company (PG&E), a major investor-owned California utility. 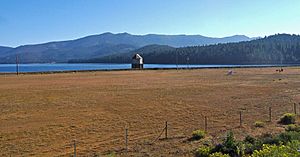 Intake tower at Almanor dam, supplying a year around flow downstream to the continuation of the North Fork of the Feather River.

All content from Kiddle encyclopedia articles (including the article images and facts) can be freely used under Attribution-ShareAlike license, unless stated otherwise. Cite this article:
Lake Almanor Facts for Kids. Kiddle Encyclopedia.