Valley County is a rural county located in the U.S. state of Idaho. As of the 2020 census, the population was 11,746. The county seat is Cascade, and the largest city is McCall. Established in 1917, it was named after the Long Valley of the North Fork of the Payette River, which extends over 30 miles (50 km) from Payette Lake at McCall south to Cascade to Round Valley. The valley was formerly a summer pasture for livestock from the Boise Valley. Since the completion of the Cascade Dam in 1948, much of the northern valley has been covered by the Cascade Reservoir.

Valley County is home to the Idaho ground squirrel.

Packer John Welch, who had contracted to freight supplies to miners of Idaho City, established a camp on Gold Fork Creek and a brush cabin on Clear Creek in the 1860s. He also established a station near what later became the town of Cascade.

During the 1870s, prospectors and miners started searching for gold. The Clara Foltz mines opened on Paddy Flat, and other diggings commenced on Boulder and Gold Fork Creeks. In the late 1870s, the last of the Sheepeater Tribe was removed from Long Valley and Round Valley to a reservation. As the gold sources dwindled, a few of the miners took up squatter's rights. James Horner built a cabin on Clear Creek in 1881, other miners settled on the Payette River.

Also in 1888, the first post offices in Valley County were opened at VanWyck, another one opened at Lardo in 1889. That same year Louis McCall and other settlers took squatter's rights on Payette Lake. Their homesteads were the nucleus of what would later become the town of McCall. A freight stop was established at Lardo to service the increased mining activity at Warren Meadows.

The 1890 census stated 538 people resided in the VanWyck precinct, and 110 resided in the Alpha precinct. Land survey maps drawn in the 1890s show four schools. The maps also point out sawmills at Warner's Pond and on Gold Fork Creek. A small reservoir near VanWyck can also be seen on them.

The 1890s were a period of strife for the new settlers. Ranchers from south of Long Valley annually brought their large herds of cattle to graze in Long Valley. The homesteaders resented the intrusion and retaliated on several occasions by slaughtering the outsiders' cattle.

Gold was first discovered in the Thunder Mountain area in 1893, W.H. Dewey began mining on a large scale in 1902. As many as 3,000 miners swarmed into the region.

From the 1910s onwards logging became, along with farming and ranching, the economic mainstay of Long Valley. Towns distant from the railroad, such as Alpha, Crawford and Roseberry, soon lost their vitality and died. Towns near the railroad, such as Cascade, Donnelly and McCall, thrived and became the population centers of Valley County. 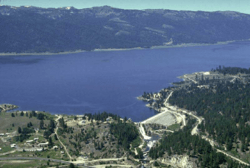 The county's primary highway is the north–south State Highway 55, the Payette River Scenic Byway, a designated national scenic byway. It heads north from Eagle in Ada County to Horseshoe Bend in Boise County, and climbs the whitewater of the Payette River to Cascade and McCall. The route turns west at Payette Lake in McCall and ends at New Meadows in Adams County, at the junction with US-95.

The county has public-use airports owned by the state, by the U.S. Forest Service, and by local municipalities. 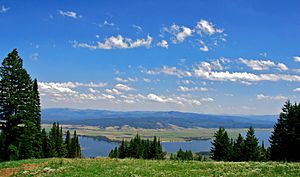 View from the top of West Mountain at Tamarack Resort, overlooking Lake Cascade to the east

All content from Kiddle encyclopedia articles (including the article images and facts) can be freely used under Attribution-ShareAlike license, unless stated otherwise. Cite this article:
Valley County, Idaho Facts for Kids. Kiddle Encyclopedia.