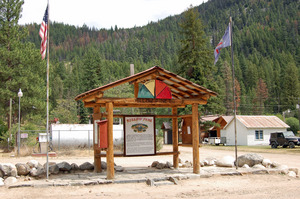 Yellow Pine is a 247-acre (1.00 km2) "inholder" community in eastern Valley Co., located on the East Fork of the South Fork of the Salmon River, approximately half a mile upstream from its confluence with Johnson Creek. It is bounded on the north by the Payette National Forest and on the south by the Boise National Forest. Located at 4,802 feet (1,464 m), Yellow Pine has historically served as the trade center for the larger Yellow Pine basin mining area, including Stibnite. Many of the early miner-settlers came from Warren.

In 1906 Albert Behne established the first post office and mail service. Behne had a dream. A grower of roses who loved classical music and opera, he envisioned a thriving city complete with street cars. In 1924 he received the patent on the 47½ acres where the village presently exists. In 1930, at the age of 76, he platted the original Yellow Pine townsite.

Other original patentees were Oscar Ray Call, Behne's former mining partner, and Henry Abstein. Abstein, the first patentee in the area, homesteaded 160 acres (0.65 km2) north and east of the present townsite. Although his primary interest was mining, he was also an active horticulturist and many of the apple trees that he planted are still living today. His original holdings have since been subdivided.

It is home to the Yellow Pine Harmonica Festival, which is held the first weekend in August of each year and draws two to three thousand fans and musicians to the remote back-country of central Idaho where they enjoy music at the outdoor stage, auction of donated items, and vendor booths along the dirt street through the center of the village.It is located near Forest camp grounds, rivers and lakes. There are yearly snowmobile trips from Warm Lake to Yellow Pine with overnight accommodations.The Frank Church Wilderness Area about twenty miles away has excellent hiking areas. The community is surrounded by Unit 25 for Elk, deer, bear, and cougar hunting.

All content from Kiddle encyclopedia articles (including the article images and facts) can be freely used under Attribution-ShareAlike license, unless stated otherwise. Cite this article:
Yellow Pine, Idaho Facts for Kids. Kiddle Encyclopedia.