The Estacada post office opened in February 1904 and the city was incorporated in May 1905. The community formed as a camp for workers building a hydroelectric dam on the nearby Clackamas River that was to supply Portland with electricity. At the time, the river was relatively inaccessible by road, forcing the Oregon Power Railway Company to build a railway to the vicinity of the river to transport crews to the river for the construction of the dam. After the construction of the Hotel Estacada, the town became a weekend destination on the railroad line for residents of Portland. During the week, the train carried freight and work crews to and from Portland. Following the development of the dams, the city became a hub for the logging industry. In the early 20th century, a trolley line connected the town with downtown Portland. The railway line has been removed and there is no longer rail service to Estacada.

The origin of the city's name is disputed. One explanation is that the city's name is a corruption of the names of a civic leader's daughters, Esther and Katie, however, there is no evidence of their existence. Another theory states that:

Estacado is a Spanish word and it means "staked out" or "marked with stakes". It was first suggested by George Kelly as a name for the town site at a meeting of the Oregon Water Power Townsite Company directors on December 27, 1903. Kelly had selected the name at random from a U.S. map showing Llano Estacado in Texas. If Kelly's suggestion had not been drawn from the hat, the town could have been named Rochester, Lowell or Lynn. The name Estacada is also used in Arizona.

Outside the city limits the land is mainly farmland, extending from the Springwater area to the south, Eagle Creek to the west, and the Mount Hood National Forest to the north and east.

The Clackamas River, flowing by the city, drains into the Willamette River, thence the Columbia. There are four dams on the Clackamas River upstream of Estacada: River Mill Dam, Faraday Dam (a diversionary dam), North Fork Dam, and Oak Grove Dam, a diversionary structure on the Oak Grove Fork Clackamas River. Portland General Electric operates all four dams and related infrastructure. The former Cazadero Dam on the river was destroyed by the Christmas flood of 1964 and reconstructed as Faraday Dam.

There were 1,062 households of which 35.1% had children under the age of 18 living with them, 43.8% were married couples living together, 14.0% had a female householder with no husband present, 5.5% had a male householder with no wife present, and 36.7% were non-families. 30.4% of all households were made up of individuals and 15.1% had someone living alone who was 65 years of age or older. The average household size was 2.53 and the average family size was 3.16. 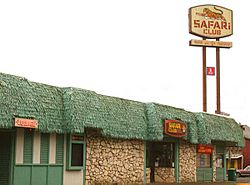 The Safari Club in downtown Estacada in 2004. The club later moved to another city, and the building is vacant.

There were 850 households out of which 39.9% had children under the age of 18 living with them, 50.9% were married couples living together, 13.1% had a female householder with no husband present, and 30.4% were non-families. 26.2% of all households were made up of individuals and 13.9% had someone living alone who was 65 years of age or older. The average household size was 2.78 and the average family size was 3.26.

All content from Kiddle encyclopedia articles (including the article images and facts) can be freely used under Attribution-ShareAlike license, unless stated otherwise. Cite this article:
Estacada, Oregon Facts for Kids. Kiddle Encyclopedia.