Clackamas Town Center is a shopping mall established in 1981 in the Portland, Oregon, metropolitan area, located on unincorporated land in the Clackamas area of Clackamas County, in the U.S. state of Oregon. It is managed and co-owned by Brookfield Properties Retail Group and is currently anchored by JCPenney, Dick's Sporting Goods, Macy's and a separate Macy's Home/Backstage store. It also includes a 20-screen Century movie theater.

The mall has a Happy Valley, Oregon, mailing address, but is actually located in an unincorporated area. However, the city of Happy Valley was interested in annexing the area that includes the mall. The nearby city of Milwaukie was also interested in annexing the area. In December 2012, mediation between officials of the two cities resulted in a draft agreement under which the mall and other land west of Interstate 205 would eventually be annexed by Milwaukie. 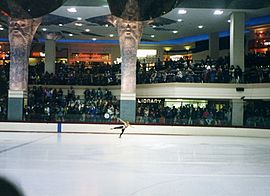 Tonya Harding skating in the mall Ice Chalet, 1994; the ice rink was removed in late 2007 during renovations

The two-level enclosed mall, with 1,218,000 square feet (113,200 m2) of retail space officially opened on March 6, 1981, built by Ernest W. Hahn, Inc. and designed by Seattle architects John Graham & Company. Prior to the mall's opening, the attached the Meier & Frank store opened in October 1980. Original anchors included JCPenney, Meier & Frank, Nordstrom, Sears and Montgomery Ward. There was also an ice rink; a five-screen movie theater; and a branch of the Clackamas County Library. Also featured were three large cedar sculptures carved by artist and woodsman, Dudley C. Carter, which were commissioned by the center in 1979, when Carter was eighty-eight. 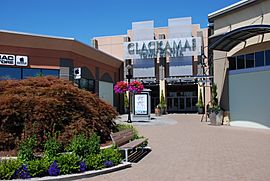 TriMet diverted or extended its bus service into the new mall, constructing a new transit center in the parking area on the mall's north side, which opened in November 1981 and by 1985 was being used by six bus routes. In the 1990s, Olympic skater Tonya Harding frequently practiced on the ice rink. 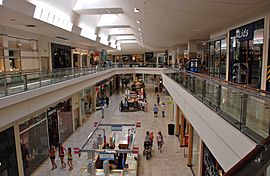 General Growth Properties acquired a 50% interest in the property in 2002 and assumed management. A major redevelopment began in 2005 to add 250,000 sq ft (23,000 m2) to the center. As part of the construction the area formerly occupied by the ice rink was gutted, and the Carter sculptures were removed. Designed by architectural firm DLR Group, the renovation and expansion added approximately 40 new stores and restaurants, many in a new lifestyle center on the south side, and a new 75,000 sq ft (7,000 m2), 20-screen Century multiplex theater. The renovation also put in tranquility ponds, new flooring, lighting, furniture, escalators, elevators, handrails, and exterior upgrades. It was completed in late 2007. The new, larger movie theater opened in December 2007.

In September 2009, a new MAX Light Rail station opened at the mall, with the opening of the Green Line. The Clackamas Town Center Transit Center station is the southern terminus of the Green Line and is located on the east side of the mall's parking area. It is also served by several bus lines and it replaced the original transit center, which had closed in 2006 and temporarily been replaced by simple bus stops pending construction of the new facility.

In 2015, Sears Holdings spun off 235 of its properties, including the Sears at Clackamas Town Center, into Seritage Growth Properties.

On August 22, 2018, Sears announced that its store would be closing as part of a plan to close 46 stores nationwide. The store closed in November 2018.

On May 7, 2020, it was announced that Nordstrom would also be closing as part of a plan to close 16 stores nationwide. The store closed in June 2020. It had already been closed temporarily since March 2020, due to the COVID-19 pandemic.

The former Sears store, located at the mall's west end. This store is a Dick's Sporting Goods as of October 10, 2020.

All content from Kiddle encyclopedia articles (including the article images and facts) can be freely used under Attribution-ShareAlike license, unless stated otherwise. Cite this article:
Clackamas Town Center Facts for Kids. Kiddle Encyclopedia.