Happy Valley was originally called Christilla Valley, named after the first residents, Christian and Matilda Deardorff. They arrived in 1851 and claimed 640 acres (2.6 km2) on the floor of the valley.

The city was officially incorporated in 1965 and remained a small community until the late 1990s, when it was one of the fastest-growing cities in Oregon.

Mount Scott, an extinct volcano that is part of the Boring Lava Field, is the highest point in Happy Valley at 1,050 feet (320 m). Scouters Mountain is also a prominent feature. 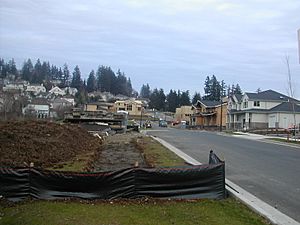 There were 4,408 households, of which 48.8% had children under the age of 18 living with them, 74.4% were married couples living together, 6.3% had a female householder with no husband present, 3.7% had a male householder with no wife present, and 15.5% were non-families. 11.0% of all households were made up of individuals, and 3% had someone living alone who was 65 years of age or older. The average household size was 3.15 and the average family size was 3.40.

Today, Happy Valley is one of the most expensive cities in the Portland metro with a median house price of $518,100.

All content from Kiddle encyclopedia articles (including the article images and facts) can be freely used under Attribution-ShareAlike license, unless stated otherwise. Cite this article:
Happy Valley, Oregon Facts for Kids. Kiddle Encyclopedia.