The indigenous people of the area were the Wenatchi people, who were sustained by abundant game and anadromous fish. The Wenatchee River, which runs through Cashmere, was historically home to coho, chinook, and sockeye salmon, as well as steelhead. These wild stocks have been severely impacted by the dams on the Columbia River, although several runs still exist. The Wenatchi people were displaced to the Colville Indian Reservation by the federal government, but still claim some fishing rights in the area.

The first European to enter the Mission Valley was Catholic missionary Father Respari, of the Oblate Fathers, in the 1850s. He lived among the Wenatchi people for twenty years teaching them his religion. He was succeeded in the 1870s by Jesuit missionary Father Urban Grassi who built the St. Francis Xavier Mission in 1873. After the missionaries' departure, the valley was next settled in the 1880s by ranchers and squatters. There were enough settlers in the area to necessitate the construction of a one-room schoolhouse in 1886. This sparse settlement was later known as Old Mission, after the Catholic missions of past. No true town existed until George Kline opened the first store further down the valley in 1888 to serve the burgeoning ranch population. A post office was soon established and Kline was appointed postmaster. The town was named "Mission" after the early missionaries.

In 1892, it was revealed that the Great Northern Railroad would be building its main line through the valley and Mission was platted between the Right-of-way and the Wenatchee River in hopes of receiving a station stop on the new line. It did not receive a station at that time and no boom occurred when the railroad came. Not until 1900 did Cashmere become a flag stop and a small section house was built, manned by two employees. This small building was preserved and today exists on the property of the Cashmere Museum and Pioneer Village.

The prosperity the railroads brought revived local interest to irrigate the arid valley. In 1892, a stock company was formed with a capital stock of $5000. Local men took out mile contracts to help dig the ditch. At a great personal expense to many involved, the Peshastin Ditch was completed within twelve years. Following its activation, the town as well as the entire area, blossomed. Through the 1900s, Mission grew in earnest. The town was becoming a shipping point for the growing fruit and agricultural industry in the valley. Within several years, better rail passenger service was demanded by citizens and a new, larger depot was built in 1903 and is also still standing in its original place.

Renaming of Mission through the 1920s

By 1903 the town's population had reached over 200. Citing confusion of this town, with another in northern Okanogan County (that no longer exists), that same year, Mission and the entire valley were renamed for Kashmir, India, as local judge James H. Chase claimed it resembled the foothills of that region. The spelling was changed to a more Americanized "Cashmere". Cashmere was incorporated in 1904 and continued to prosper with the opening of the Mission Canal later that year which turned hundreds of acres of dry-unusable land into fertile farm land. Seattle investors purchased large tracts of land in and around Cashmere and constructed the town's first hotel and saloon in 1905. A library was established in 1908 by the town's Woman's club. By 1909, Cashmere housed three banks. Telephone service was installed in 1909 followed by paved sidewalks in 1913, electric lights in 1914 and paved streets in 1919. 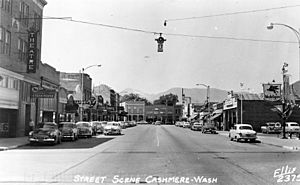 Downtown Cashmere in the 1950s

The Cashmere area has a rich history of tree fruit production, starting with the first pioneers. With the construction of the Peshastin irrigation ditch in the 1890s, ranches and sagebrush gave away to lush orchards climbing up the walls of the valley. While apples grow very well, the soils and climate are ideal for the production of pears. Bartlett and D'Anjou varieties are well represented. It is said that Cashmere might be the best place to grow pears in the US. Beginning in the 1910s, a number of orchards were opened in Cashmere to take advantage of the area's balmy climate. While many orchards have given way to development, the history of fruit production is still evident in the many orchards and historical fruit warehouses in the area. Overdevelopment is a real threat to the agricultural heritage of the area; the agreeable climate and outstanding scenery attract many people to the area.

The history of the area is also tied to timber production. Cashmere was the home of a large sawmill. The first settlers found abundant ponderosa pine (Pinus ponderosa) and Douglas-fir trees. These timbers were of the highest quality because of the arid climate, which causes the trees to grow very slowly, keeping a tight grain. 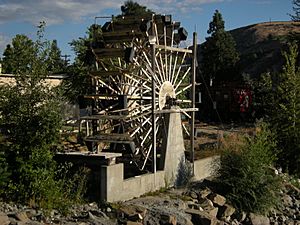 The Burbank Homestead Waterwheel at the Cashmere Museum is listed in the National Register of Historic Places (NRHP), as is the Blewett Arrastra (a drag-stone for pulverizing ore; not shown), also in the museum.

This region experiences warm and dry summers that have become increasingly hot during the past decade. On July 4, 2015, the max. temp was 106 F and the mean temp was 88 F (Wunderground.com). According to the Köppen Climate Classification system, Cashmere has a warm-summer Mediterranean climate, abbreviated "Csb" on climate maps.

There were 1,118 households of which 36.7% had children under the age of 18 living with them, 53.2% were married couples living together, 10.8% had a female householder with no husband present, 3.9% had a male householder with no wife present, and 32.0% were non-families. 26.8% of all households were made up of individuals and 12.8% had someone living alone who was 65 years of age or older. The average household size was 2.66 and the average family size was 3.24.

There were 1,105 households out of which 36.4% had children under the age of 18 living with them, 53.3% were married couples living together, 8.9% had a female householder with no husband present, and 35.1% were non-families. 29.8% of all households were made up of individuals and 15.7% had someone living alone who was 65 years of age or older. The average household size was 2.59 and the average family size was 3.28. 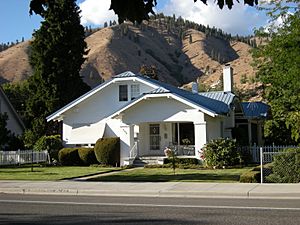 Cashmere's Cottage Avenue Historic District is also listed in the NRHP. Here, the Cascade foothills can be seen behind a Craftsman home typical of the district.

Cashmere is surrounded by the eastern foothills of the Cascade Mountains. The Alpine Lakes Wilderness Area is about 10 miles to the West. The Peshastin Pinnacles is a historical climbing area located a few miles from town. Some of America's first technical climbing routes were established here by Fred Beckey and others. The Devil's Gulch mountain bike trail is said to be the premier downhill ride in the state of Washington, and is located just south of town. This ride attracts thousands of mountain bikers from Seattle and elsewhere each year. The Wenatchee river is a popular whitewater destination and runs right through Cashmere. The river provides challenging rapids for rafters and kayakers each spring during runoff. Several famous rapids occur in the stretch of river that runs through town.

All content from Kiddle encyclopedia articles (including the article images and facts) can be freely used under Attribution-ShareAlike license, unless stated otherwise. Cite this article:
Cashmere, Washington Facts for Kids. Kiddle Encyclopedia.