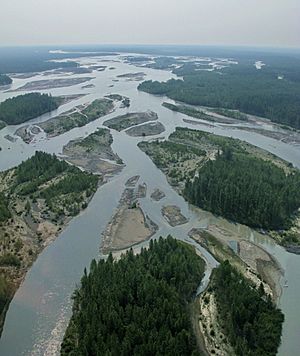 Chulitna River originates from the confluence of Middle and East Fork Chulitna River in the valley between the Alaska Range and Talkeetna Mountains east of the Denali, flows in a southerly direction and flows at Talkeetna, opposite the Talkeetna River, in the Susitna River, which flows into the Cook Inlet. Larger tributaries include West Fork Chulitna River, Ohio Creek, Fountain River, Hidden River, Coffee River and Tokositna River, all from the right. The catchment area of the Chulitna River covers about 6600 km2. The mean discharge near the mouth is 250 m³ / s. The highest monthly discharges of the river, which is mainly fed by glacial meltwater, occur in the months of June to August.

The George Parks Highway from Anchorage to Fairbanks runs parallel to the entire river.

The name of the river is of local Alaska's natives and was documented in 1898 by G.H. Eldridge.

All content from Kiddle encyclopedia articles (including the article images and facts) can be freely used under Attribution-ShareAlike license, unless stated otherwise. Cite this article:
Chulitna River (Susitna River tributary) Facts for Kids. Kiddle Encyclopedia.