The Susitna River (Sasut Na’ in Ahtna or Susitnu in Dena'ina; Russian: Суситна) is a 313-mile (504 km) long river in the Southcentral Alaska. It is the 15th largest river in the United States, ranked by average discharge volume at its mouth. The river stretches from the Susitna Glacier to Cook Inlet's Knik Arm.

Dena'ina Indian name meaning "sandy river" published by the Russian Hydrog. Dept. as "R(eka) Sushitna," meaning Sushitna River, on Chart 1378 dated 1847. The Susitna River appears to have been first explored in 1834, by a "Creole named Malakov", and the name may have been obtained by the Russians at that time. The present spelling of the name has evolved due to euphemistic reasons.

The Susitna along with the Matanuska River, drains the broad Matanuska-Susitna Valley south of the Alaska Range. 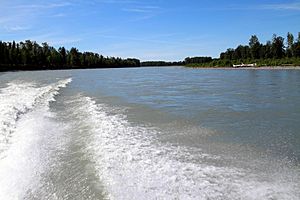 Susitna River on a clear sunny day in June 2015 near Talkeetna. 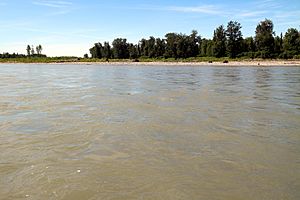 Susitna River on a clear sunny day in June 2015 near Talkeetna.

It receives the Yentna River from the northwest approximately 5 miles (8 km) north of Susitna. It is navigable to 85 mile (137 km) upstream from its mouth to Talkeetna. Valdez Creek, notable for its 1903 gold mining, is one of the small headwater tributaries of Susitna River.

The Susitna River is one of Southcentral Alaska's premier sport fishing streams, with significant runs of Chinook and Coho salmon, along with resident grayling, burbot, and rainbow trout. Located within a roadless area, access to the river is difficult and is made usually by power boat or by floatplane. 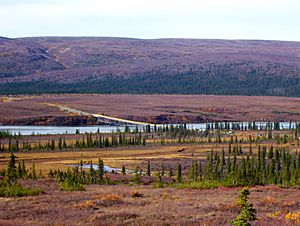 Matanuska-Susitna Borough owns much of the land along the Susitna and Deshka Rivers. The impacts of summer recreational use and tourists have caused loss of riparian vegetation and bank erosion along the Deshka River's lower reaches, which has been partially remedied through a restoration project in the summer of 2002. However, the borough currently lacks either regulations to prevent further damage or the means to enforce such regulations. 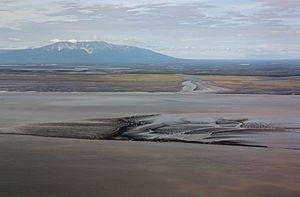 Susitna River delta with Mount Susitna on the left skyline.

Susitna River was named by the Dena’ina Alaska Native people meaning "sandy river". The Dena'ina language name is Susitnu. The Susitna appears to have been first explored by outsiders in 1834 by a Creole Indian named Malakor. The 1890 census reported that Susitna Village on the east bank of the river had 146 Kenai Natives and 27 houses.

Susitna River is on the North side of Cook Inlet 22 miles (35 km) North-East of North Foreland. Mount Susitna, a prominent landmark along the upper part of the inlet, is about 6 miles (10 km) West of the Susitna River at a point 13 miles (21 km) above the mouth.

The channels across the flats at the mouth of Susitna River have depths of 2 feet (610 mm) or less at low water and change during the winter and spring because of ice and freshet action. The channels above the mouth are said to change frequently in the spring and early summer.

Little Susitna River, 9 miles (14 km) West of Point MacKenzie, is said to be navigable for landing craft and skiffs at high water for about 8 miles (13 km).

The depths offshore and in the approach to Little Susitna River are subject to drastic and continual change.

The Susitna River Bridge is a railroad bridge of the Alaska Railroad in south-central Alaska. It spans the Susitna River on the eastern edge of Denali State Park near Gold Creek. The bridge is on the National Register of Historic Places.

Construction of the bridge took place from October 1920 to February 1921. The span is 503 ft., with a height of 71 ft. in the center; the steel weighs 2,000 tons, and rests on two concrete piers, each 50 ft. high and 70 x 40 ft. in cross-section, and each containing 1,500 cubic yards of concrete. The location was chosen, just downstream of a curve, after observing the pattern of ice jams through the preceding three years.

Between approximately October 19 and November 14 the Susitna River ices or freezes over for the winter.

All content from Kiddle encyclopedia articles (including the article images and facts) can be freely used under Attribution-ShareAlike license, unless stated otherwise. Cite this article:
Susitna River Facts for Kids. Kiddle Encyclopedia.