Batesville is a city in Franklin and Ripley counties in the U.S. state of Indiana. The population was 6,520 at the 2010 census, making it the largest community in both counties but is not the county seat of either. The Batesville Casket Company is headquartered here. Medical technology company Hillrom has a substantial presence in the town, employing over 1,700 people at its office, innovation and manufacturing campus. Batesville is noted for its central location between Indianapolis, Cincinnati, and Louisville.

Central Batesville Historic District was listed on the National Register of Historic Places in 2011. 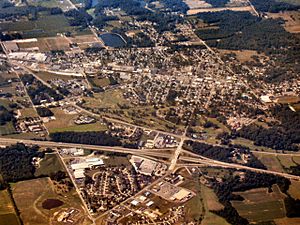 Batesville from the air, looking southwest

Batesville was founded by George H. Dunn, owner of the John Callahan Trust Company. The company bought land and created new towns along rail lines that it began since Dunn was president of the Cincinnati and Indianapolis Railroad. Joshua Bates, who platted the town of Batesville, is thought to be the source of the name. On November 1, 1853, the first train from Cincinnati to Indianapolis passed through Batesville.

Once the railway opened, Dunn and Bates constructed more buildings. George Sims laid out Batesville's first addition in 1858. The following year, German immigrant Henry Boehringer became Batesville's first major builder. A three-story building with a basement on East Pearl Street (formerly known as Broadway Street) became known as the Boehringer Hall because of the dance floor on the third story. The Catholic congregation used the basement before they had built their church.

Between 1860 and 1870, Boehringer built a row of apartments and homes on the north side of Batesville on Boehringer Street. Along with building the apartments and housing, Boehringer purchased the property lot where the Ward School now stands. In 1863 Conrad Rapp purchased numerous property lots on east Broadway Street and bought Louis Walter's gristmill. Louis Walter was the first miller in Batesville and had owned the mill since 1858. In 1865, John F. Brinkman built the Sherman House as a hotel. The building was named after General William Tecumseh Sherman, who had won the final victory for the Union Army in his "march to the sea".

Sebastian Messersmith built Union Hall in 1865. It was a two-story building on the west side of Main Street and just north of South Street. The Union Hall was used by the fire department for meetings and it was used by the public school while the school building was being rebuilt. It was also used as a boarding house for mill workers and visiting lumber salesman. This was an important building to the citizens of Batesville. Batesville has been known for its many factories built between the 1870s and the present.

In 1873 the Greeman Bracket Company began manufacturing under the family name. Their business was one of the leading industries for thirty years. The Schrader Furniture Factory arose in 1873. However, in 1875, the factory was destroyed by a fire but was rebuilt. When the founder Herman Schrader died, the business was bought by John and William Hillenbrand. In 1874, another furniture factory burned down, the Union Furniture Factory. The following year, the Blank Bros. Furniture Manufacturing Company was erected. Also, in 1879, Batesville published its first newspaper, The Prairie Farmer.

During the 1880s the town of Batesville started its first form of government appointed by the community. The first mayor was George M. Hillenbrand. The first town board served without pay. The board consisted of five officers: Jacob Blank Jr., John Lehmkuehler, John Hillenbrand, William Hillenbrand, and Christian Schwieler. Much of the money that was put toward the town came directly out of the officers' pockets. For example, in February 1883, they donated $153.06 to go toward paying for the town's bills. By September, when the financial report was reviewed, Batesville only had $1.82 in its account. Also during 1883, Batesville began major road construction.

In 1884 Batesville organized the Batesville Casket Company. It was managed by J. Spiegel and later purchased by George M. Hillenbrand in February 1906. Also in 1884, the town jail was completed at a cost of $211.55. The inmates were forced to break stone to pay for their stay in the prison.

Several developments took place in 1887, including new additions to the town and telephone connections to the town of Oldenburg. These developments were funded by a grant applied for by Mr. Haverkos. Also in 1887, John Hillenbrand and Victor Oberting opened a stone quarry on some of Mr. Hillenbrand's land near Batesville. In December 1887, the town hall was completed. The town hall was separated into two parts: one for the town board and the other for the fire company. The town hall was also rented out for public gatherings.

In March 1888, the school board made a decision to construct an addition onto the schoolhouse. This proposal estimated that the total cost of the addition would be $1,500. Also in 1888, the first city attorney (James H. Connelly) was appointed at a salary of $35 per year, and many new businesses were added. In this year, Henry F. E. Schrader moved to Batesville and opened a tin shop and built homes. Also, Henry H. Kramer started a grocery store on the corner of Walnut and Boehringer. As well as new stores, a covered bridge was built over the Laughery Creek, making travel much easier.

In 1889, Batesville finally paved its roads with stone that came from the Hillenbrand and Oberting Stone Quarry. As well as the paving of the roads, Batesville opened the Batesville State Bank. In February 1890, Batesville had built its first sidewalks. Also in the 1890s, street lamps were introduced to Batesville. Originally, these lamps were oil lamps. However, in October, a proposal was written to turn them all into electric lamps, but the proposal was denied. On January 29, 1894, the first electric lamp was placed in front of Town Hall.

In 1895 a petition was written and accepted to build another school. The total estimated cost would be $5,700. The land would cost $700 and the school building would cost $5,000. In 1897 Batesville decided to stop the use of the electric lamps because of the rates that people had to pay to keep them going, but then in 1898 Batesville decided that they would reduce the rates and only use the lamps when needed.

The climate in this area is characterized by hot, humid summers and generally mild to cool winters. According to the Köppen Climate Classification system, Batesville has a humid subtropical climate, abbreviated "Cfa" on climate maps.

The main mode of transportation to and around Batesville is by road. There are several major routes that intersect the city.

Indiana 229 runs from north to south through the center of the city. It connects Batesville with Oldenburg to the north and Indiana 48 to the south. A portion of Main Street and Walnut Street run concurrent with Indiana 229 through the city center.

Indiana 46 runs east to west through Batesville connecting it with Greensburg to the west and several small communities to the east. Indiana 46 runs parallel to Interstate 74.

There is also a railroad, owned by the Central Railroad Comp. of Indiana, that runs through Batesville that connects Indianapolis to Cincinnati. This line is limited to freight.

Unfortunately, there are no available taxi or limousine services operating in Batesville.

Batesville also has a movie theater, The Gibson Theatre. Built in 1921 by Dr. C. W. Gibson, the theater features a unique neon-lit look.

The largest industry in Batesville is the manufacturing of hospital and health care equipment, most notably hospital beds. William Hillenbrand and his aunt Mary Mitchell founded HillRom in 1927. The business grew rapidly after the Great Depression ended. William convinced hospitals to use his wooden hospital bed for six months free of charge.

Batesville has one public school corporation, Batesville Community Schools, which consists of Batesville Primary, Batesville Intermediate, Batesville Middle, and Batesville High School. As of 2011[update]–2012 school year, there were approximately 2,083 students enrolled in the district.

Ivy Tech Community College has a campus at Batesville, a branch of Ivy Tech Southeast.

The town has a lending library, the Batesville Memorial Public Library.

All content from Kiddle encyclopedia articles (including the article images and facts) can be freely used under Attribution-ShareAlike license, unless stated otherwise. Cite this article:
Batesville, Indiana Facts for Kids. Kiddle Encyclopedia.