Greensburg is a city in and the county seat of Decatur County, Indiana, United States. The population was counted at 11,492 at the 2010 census.

Greensburg was laid out in 1822. The founder's wife being a native of Greensburg, Pennsylvania caused the name to be selected.

At the beginning of the twentieth century, race relations in Greensburg worsened, leading to the expulsion of African Americans from the city after race riots against them in 1906 and 1907. According to James W. Loewen, Greensburg then was for decades a sundown town, a town that was purposely all-white.

Tree on the Courthouse Tower 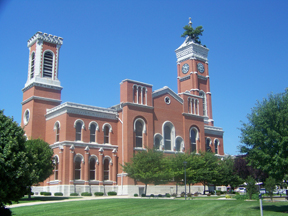 Tree on the Courthouse Tower in Greensburg, Indiana

The Decatur County Courthouse in Greensburg is known for a tree which grows from the top of the Courthouse Tower, giving Greensburg its nickname, "Tree City".

There have been one or more trees growing continually since the first tree was noticed in the early 1870s. Later, other small trees appeared on the clock tower.

County officials were initially concerned that the trees would cause damage to the roof, and a steeplejack was hired in the 1880s to remove some of them. Two trees were left, with one ultimately growing to a height of nearly 15 feet (4.6 m). By the time it died, another tree had appeared.

Today, there are two trees on the tower. During a recent tree trimming a piece of the tree was examined by several Purdue University foresters and they positively identified the tree as a mulberry tree.

Greensburg is located adjacent to Interstate 74 halfway between Indianapolis and Cincinnati. U.S. Highway 421 links Greensburg with Indianapolis to the north and Lexington, Kentucky, to the south. State Road 3 connects Greensburg with Muncie and Fort Wayne to the north and the Indiana suburbs of Louisville, Kentucky, to the south. State Road 46 links the community with Columbus, Bloomington, and Terre Haute to the west and Batesville to the east. Recently a construction project, which has made going east on Interstate 74 from the ramp west of town possible, has been completed.

Greensburg is a likely train stop on the proposed high-speed rail line between Indianapolis and Cincinnati. This line is part of the Midwest Regional Rail Initiative, which is the master plan for a high-speed rail network throughout the midwestern United States.

The Greensburg-Decatur County Airport consists of a single runway measuring 3,343 ft (1,019 m). by 40 ft (12 m). There are tentative plans to either expand the current runway or build a new airport elsewhere in Decatur County.

Climate is characterized by relatively high temperatures and evenly distributed precipitation throughout the year. Temperatures are high and can lead to warm, oppressive nights. Summers are usually somewhat wetter than winters, with much of the rainfall coming from convectional thunderstorm activity. The Köppen Climate Classification subtype for this climate is "Cfa" (Humid Subtropical Climate).

The largest employer in Greensburg is Delta Faucet Company, who has operated a manufacturing facility in the city since 1958. In addition to faucet components, Delta's Greensburg plant also produces bath tubs and shower fixtures.

Honda Motor Company operates an automobile manufacturing plant (Honda Manufacturing of Indiana, LLC) along Interstate 74 in Greensburg. The company purchased 1,700 acres (6.9 km2) at the northwest edge of Greensburg in 2006. It took about 16 months to develop the site and construct the massive auto assembly facility. Mass production of the Honda Civic (eighth generation) sedan commenced at this plant on October 9, 2008. A second shift was added in fall 2011. Production capacity was increased by 25% to accommodate the start of production of the Civic hybrid in early 2013. In 2018, Honda invested US$32.5 million to expand its plant with a new 19,200 square-foot building for new in-house subassembly of vehicles’ front end module, including radiator and cooling fan.

As of September 2021, Honda Manufacturing of Indiana employs over 2,700 people and produces the eleventh-generation Honda Civic hatchback, the fifth-generation Honda CR-V, and the third-generation Honda Insight. The Acura ILX was also assembled at Honda Manufacturing of Indiana from 2012 to 2015 until production was transferred to Honda's plant in Marysville, Ohio. The Acura ILX hybrid became the first hybrid model built by Honda in North America. Honda has been exporting Civic made in Indiana to Mexico, Latin America, the Caribbean, and the U.S. territories of Puerto Rico, Guam and Saipan since 2009.

All content from Kiddle encyclopedia articles (including the article images and facts) can be freely used under Attribution-ShareAlike license, unless stated otherwise. Cite this article:
Greensburg, Indiana Facts for Kids. Kiddle Encyclopedia.