The Town of Cedaredge is a Home Rule Municipality in Delta County, Colorado, United States. The town population was 2253 at the 2010 United States Census. Cedaredge sits in the Surface Creek Valley beneath the southern slopes of the Grand Mesa, the largest mesa in the world. Its elevated vantage point affords southern views of the San Juan Mountains, the Black Canyon of the Gunnison National Park, and the communities of Delta, Olathe, and Montrose. Cedaredge is a small, agricultural community which produces apples, peaches, and wine from the region's several vineyards. Notable attractions include Cedaredge Golf Club, Historic Pioneer Town, and an art gallery and craft store housed in a renovated apple packing shed. Regional sporting activities include camping, trophy hunting, hiking and Gold Medal fishing at more than 250 lakes on the Grand Mesa. During the winter locals partake in snowmobiling and Nordic skiing on the Mesa's numerous trails. Powderhorn Resort is located 30 miles (48 km) north of Cedaredge and offers a variety of ski terrain such as groomers, bumps, glades, and boulder fields, as well as two quality terrain parks.

Up until 1880 much of central and western Colorado was inhabited by the Ute Indians. Under the Act of June 15, 1880, the Utes ceded a large portion of their land to the United States, including the Surface Creek Valley. On September 1, 1881, the last band of Utes made their exodus from western Colorado to the northeastern part of Utah under escort of troops from Fort Crawford. Settlers soon began arriving, building homesteads, barns, businesses, and churches. Much of the land was carved up into cattle ranches, fruit orchards, and fields of alfalfa, hay, corn, and other grains.

The town of Cedaredge was officially incorporated on March 25, 1907. 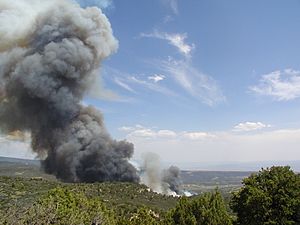 McGruder fire on 7-3-04 below Rollins Sandstone

Lightning struck a tree on Friday July 2, 2004. The fire smoldered overnight and hot dry winds fanned the flames into a large wildfire on July 3, 2004. By Sunday July 11, the fire was considered 100 percent contained. Thanks to the efforts of the Cedaredge volunteer and other area fire departments, San Juan Hot Shots, the BLM and Forest Service, no homes or lives were lost. The total area consumed by the McGruder fire was estimated at about 3,000 acres (12 km2), 1,467 acres (5.94 km2) of which was private land, the rest belonging to BLM and Forest Service.

The Town of Cedaredge celebrated its centennial in 2007.

Sites of Interest and Events

Pioneer Town is a museum and historical village. The centerpieces of Pioneer Town are the octagonal Bar-I Silos, the last remaining structures of the Bar-I Ranch, a cattle ranch that was established in the early 1880s. You can go back in time by visiting the museum's replicas of early 20th-century town buildings, including a western saloon, marshall's office, barber shop, bank, clothing store, jail, creamery, and a working blacksmith's shop. Pioneer Town is also the home of the Chapel of the Cross, with its summer season concerts; available for private weddings. It is a prairie-style chapel housing one of the world's largest digital organs. Also in Pioneer Town is the Doll and Toy House, a building designed to display a portion of the museum's large collection of dolls and toys from the past, and the Sutherland Indian Museum housing one of Colorado's largest arrowhead displays. The old Stolte Packing Shed also serves as a rental facility for local events and receptions. Open Memorial weekend in May through the first weekend in October, with its renowned Antique and Classic Car Show as part of the town of Cedaredge's Applefest weekend celebration.

Opened in the Spring of 1988, as the Deer Creek Village Golf Club, Cedaredge Golf Club is a premier public golf course in Cedaredge, Colorado. The golf course was completed in April 1992 and is located on what was part of the Bar-I Cattle Ranch hayfields of the early 1900s. This 18 hole course can suit both the serious sportsman and the occasional enthusiast; the back nine has some of the most difficult golf terrain on the Western Slope. The course offers four tee boxes per hole, and adapts to any playing level. Cedaredge Golf Club includes a driving range, clubhouse, and grill.

Nestled in a protected valley at 6,100 feet (1,900 m) in elevation, the Cedaredge Golf Club course features natural cedars and winding creek beds. Adding to the challenge of play and the beauty of the surroundings is a variety of trees, lakes and bunkers. Each hole offers breathtaking views of the 14,000-foot (4,300 m) peaks of the San Juan Mountains, the West Elk wilderness, Grand Mesa, and the Uncompahgre Mountains.

In 1978 the "Cedaredge Harvest Festival" officially changed its name to "AppleFest." Applefest is an annual celebration of apples, arts, music, and food held the first weekend in October in Cedaredge, Colorado. It is attended by around 15,000 visitors each year and typically over 200 food, arts and crafts vendors. The event features a classic car show, antique tractor show, and motorcycle show.

Applefest 2014 marked the 37th Anniversary of the event.

The Grand Mesa Scenic and Historic Byway scenic and historic byway was approved by the Colorado Department of Transportation in 1991. It runs North from Cedaredge along Highway 65, to the top of the Grand Mesa at more than 10,000 feet (3,000 m). Grand Mesa visitors center has maps, books and other information about the area. The byway sneaks past Island Lake, one of more than 300 trout-filled lakes in Grand Mesa National Forest. On the north side of the Mesa are the towns of Mesa, Collbran, and Powderhorn Ski Resort. The byway continues along De Beque Canyon, with its colorful sandstone bluffs, and eventually meets Interstate 70 in the town of De Beque.

Cedaredge Volunteer Fire Station has held an annual "5-Alarm Chili Cook-off" fundraiser since 2000. This yearly fundraising event kicks off the town of Cedaredge's Applefest celebration during the first week of October.

The climate in Cedaredge, like much of the Grand Valley and Uncompahgre Valley, consists of mild, snowy winters; summers are hot and dry with scattered afternoon thunderstorms occurring often but delivering a small amount of total precipitation. Summers see typical highs of 92 and lows of 60, winters can see highs in the 50s and lows of 11 °F (−12 °C).

There were 894 households out of which 20.8% had children under the age of 18 living with them, 51.6% were married couples living together, 7.3% had a female householder with no husband present, and 38.0% were non-families. 34.3% of all households were made up of individuals and 21.1% had someone living alone who was 65 years of age or older. The average household size was 2.07 and the average family size was 2.61.

All content from Kiddle encyclopedia articles (including the article images and facts) can be freely used under Attribution-ShareAlike license, unless stated otherwise. Cite this article:
Cedaredge, Colorado Facts for Kids. Kiddle Encyclopedia.