Chesapeake City is a town in Cecil County, Maryland, United States. The population was 673 at the 2010 census.

The town was originally named by Bohemian colonist Augustine Herman the Village of Bohemia — or Bohemia Manor — but the name was changed in 1839 after the Chesapeake and Delaware Canal (C&D Canal) was built in 1829. Today, the town contains numerous old homes from that era that have been converted into bed and breakfasts, restaurants and the local historical museum.

The town was separated into north and south sections when the C&D Canal was built through the middle of the town. The two were connected by a drawbridge until 1942, when that was destroyed by a freighter that struck it. The current bridge opened in 1949.

The new bridge had to be tall enough to allow supertankers to pass beneath it, resulting in a structure so high and long that cars no longer went into the city to cross the canal. Business declined for decades thereafter.

Chesapeake City is the location of the Old Lock Pump House of the C&D Canal, listed on the National Register of Historic Places in 1966. The South Chesapeake City Historic District was listed in 1974.

In the late 20th century, Chesapeake City was the home of one of the world's most important stud farms, Windfields Farm.

There were 335 households, of which 20.6% had children under the age of 18 living with them, 40.0% were married couples living together, 9.6% had a female householder with no husband present, 3.3% had a male householder with no wife present, and 47.2% were non-families. 39.7% of all households were made up of individuals, and 15.5% had someone living alone who was 65 years of age or older. The average household size was 2.01 and the average family size was 2.67.

Chesapeake City is a part of the Cecil County Public Schools System. There are three schools in the town: 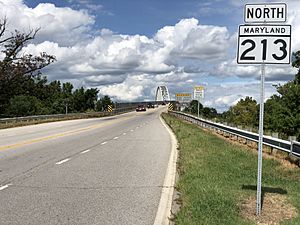 All content from Kiddle encyclopedia articles (including the article images and facts) can be freely used under Attribution-ShareAlike license, unless stated otherwise. Cite this article:
Chesapeake City, Maryland Facts for Kids. Kiddle Encyclopedia.