Ruidoso is a village in Lincoln County, New Mexico, United States, adjacent to the Lincoln National Forest. The population was 8,029 at the 2010 census. The city of Ruidoso Downs and the unincorporated area of Alto are suburbs of Ruidoso, and contribute to the Ruidoso Micropolitan Statistical Area's population of 21,223.

A mountain resort town, Ruidoso lies in the Sierra Blanca mountain range of south-central New Mexico, where it merges with the Sacramento Mountains to the south. Ruidoso is a resort community close to the slopes of Ski Apache, the Mescalero Apache Tribe-owned ski resort on Sierra Blanca, an almost 12,000-foot (3,700 m) mountain. The tribe also operates the Inn of the Mountain Gods resort in the area, which includes a casino, hotel, arcade room and golf course. Ruidoso is the largest community in Lincoln County, and serves as the regional economic hub.

In recent years the village is contending with serious questions about the adequacy of the local water supply and zoning enforcement. As in many small communities that have been recently "discovered", there is an ongoing debate about how best to plan for additional growth.

The village received its name from the Rio Ruidoso (Spanish for "Noisy River"), a small stream that weaves through the city.

In December 2006, 7% of eligible voters approved a $12.6 million bond issue to finance the expansion and modernization of the local wastewater treatment plant which was built in 1982. In 2011, construction was completed on a $36 million wastewater treatment plant. This state-of-the-art facility utilizes membrane technology to achieve discharge standards within regulatory guidelines. The plant was designed to accommodate future growth. The average daily volume is 1.6 million gallons. The plant can currently process up to 2.7 million gallons per day.

The town and the river was hit by devastating flash flooding from late at night on July 26, 2008 through July 27, 2008. The remnant circulation of Hurricane Dolly passed over the area and brought as much as 9 inches (23 cm) of rainfall. Hundreds of tourists, campers and residents were evacuated and the storm caused damage at the Ruidoso Downs racetrack. One person was killed in the flooding, approximately 900 persons required rescue, approximately 500 structures were damaged, and initial damage estimates for Ruidoso were in the range of $15– 20 million.

In March 2016 the Village of Ruidoso entered into a Sister City relationship with Puerto Penasco, Sonora, Mexico.

According to the Köppen-Geiger climate classification system, Ruidoso has a subtropical highland climate (Cfb) due to its moderate temperature ranges and precipitation throughout the year. Bi-modal precipitation falls as rain during summer monsoon and as winter snow. Snowfall varies highly by the year. See http://en.climate-data.org/location/128906/ for additional climate information. 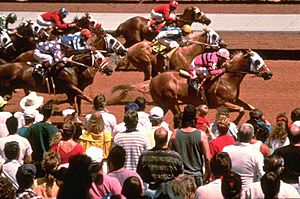 There were 3,434 households, out of which 23.6 percent had children under the age of 18 living with them, 53.2 percent were married couples living together, 8.8 percent had a female householder with no husband present, and 35.0 percent were non-families. 29.8 percent of all households were made up of individuals, and 11.3 percent had someone living alone who was 65 years of age or older. The average household size was 2.22 and the average family size was 2.72.

The Ruidoso Osos were an independent professional baseball team in the Pecos League during the 2011 season. The team was on hiatus for the 2012 season because of low attendance. There were no lights on the team's home field, meaning games were played at 4:30 p.m. Additionally, alcohol could not be sold at White Mountain Park because it was owned by Ruidoso Municipal Schools. In the 2013 season, the team moved to Raton and were renamed the Raton Osos.

All public schools operate under the Ruidoso Municipal School District.

Starting in 1954, the library developed from the Woman's Club, Beta Sigma Phi with only a small collection of books. In 1960 the Library Advisory Board was created, and Jane Parks served as the first President of the Advisory Board. Shortly after, the library was moved into a building that was once a school and Old City Hall. The library was only two rooms which the librarian Pat Ward oversaw its maintenance. In 1966, under the director Ruth McGuire Spiegel the library was moved to an old airport terminal and now had the bonus of local and state funding. The first library building was built in 1975 at 501 Sudderth Dr. and the library remained in this location for around twenty years.

In 1997 the current library was designed and built by ASA Architectures, the two-story building with vaulted windows is 14,600 square feet. The library has a garden, the Friends’ Book Shoppe, an outdoor reading patio and available window seats. In addition, the library also includes an archive room, conference room, children’s, and teen's library, two self-checkout machines and twenty-nine computers for public use. The collection consists of books, CDs, DVDs, and an e-branch with access to e-books, audio books and magazines. Some of the programs offered at the Ruidoso Public Library are children’s section, adult game night, teen scene, Ruidoso writers publishing group and a bereavement support group. Also, the library offers the New Mexico FamilyPass which provides free admission to fifteen museums and historical sites across the state. The library is open Monday-Saturday. 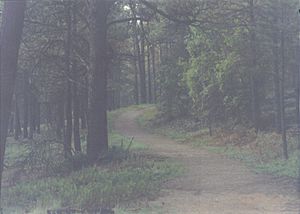 Jogging trail in a municipal park in Ruidoso just after sunrise, July 2008

All content from Kiddle encyclopedia articles (including the article images and facts) can be freely used under Attribution-ShareAlike license, unless stated otherwise. Cite this article:
Ruidoso, New Mexico Facts for Kids. Kiddle Encyclopedia.