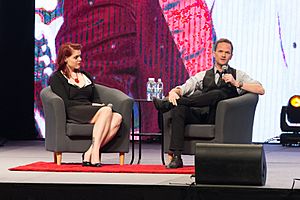 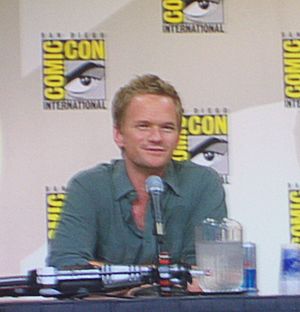 Harris at the 2008 Comic Con in San Diego, California 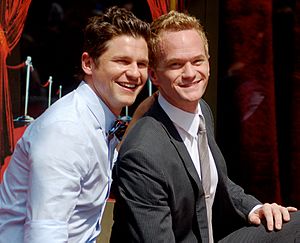 Harris with his husband David Burtka at his ceremony to receive a star on the Hollywood Walk of Fame on September 15, 2011

Neil Patrick Harris (born June 15, 1973) is an American Golden Globe and Emmy-nominated actor. Notable roles in his career include the title character of Doogie Howser, M.D., Barney Stinson in How I Met Your Mother, Col. Carl Jenkins in Starship Troopers, Dr. Horrible of the web series Dr. Horrible's Sing-Along Blog, and as a fictionalized version of himself in Harold & Kumar Go to White Castle and its sequel Harold & Kumar Escape from Guantanamo Bay.

Harris is openly gay. He confirmed this in November 2006 by saying "...I am happy to dispel any rumors or misconceptions and am quite proud to say that I am a very content gay man living my life to the fullest and feel most fortunate to be working with wonderful people in the business I love." On September 8, 2014, Harris announced on his Twitter page that David Burtka and he were married over the weekend. Harris has twins, Gideon Scott Burtka-Harris and Harper Grace Burtka-Harris.

All content from Kiddle encyclopedia articles (including the article images and facts) can be freely used under Attribution-ShareAlike license, unless stated otherwise. Cite this article:
Neil Patrick Harris Facts for Kids. Kiddle Encyclopedia.