A Series of Unfortunate Events (TV series) facts for kids

As with the book series, Lemony Snicket's A Series of Unfortunate Events follows the misadventures of the three Baudelaire children, Violet, Klaus, and Sunny, following the deaths of their parents in the destruction of their home. While the children are shuffled between various foster homes, they are pursued by Count Olaf who desires to gain control of the vast Baudelaire inheritance before the children come of age. Along the way, the Baudelaires discover their parents' connections to an elusive secret society.

Throughout its run, the series received critical acclaim with praise towards its production values, writing, faithfulness to the novels and acting, particularly that of Harris as Count Olaf.

When a mysterious fire destroys their home and kills their parents, the Baudelaire children, Violet, Klaus and Sunny, are placed in the care of their distant 'relative' Count Olaf, an actor who is determined to claim the family fortune for himself. Following Olaf's failed attempt and his plot being exposed, the Baudelaires are placed in the custody of a series of inept or unsympathetic guardians, as they try to elude Olaf and his followers and uncover the mystery behind a secret society from their parents' past. The mysterious and melancholic narrator Lemony Snicket explicates the Baudelaires' adventures for the audience.

See also: List of A Series of Unfortunate Events characters

Daniel Handler cameos as a fish salesperson at Lake Lachrymose.

The first season adapts the first four books of the novel series: The Bad Beginning, The Reptile Room, The Wide Window and The Miserable Mill.

The second season adapts books five through nine of the novel series: The Austere Academy, The Ersatz Elevator, The Vile Village, The Hostile Hospital, and The Carnivorous Carnival.

The third season adapts the final four books of the novel series in seven episodes: The Slippery Slope, The Grim Grotto, The Penultimate Peril, and The End, with the final book being adapted as a single episode. 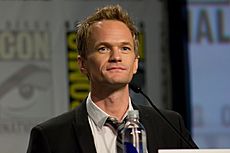 Neil Patrick Harris portrays Count Olaf in the series and serves as a producer.

On December 3, 2015, an open casting call was announced for the roles of Violet and Klaus Baudelaire. Sonnenfeld had worked with Malina Weissman before on the film Nine Lives and had appreciated her ability to speak quickly without overacting, and selected her for Violet from her audition. They had more difficulty in landing an actor for Klaus, but Louis Hynes, who had no professional acting prior, had submitted a promising audition video. Casting flew him from London to Los Angeles while in the middle of set production, and after about an hour of testing with Weissman, Hynes was selected as Klaus as a last-minute option. Both were announced by January 2016.

Handler had first considered Neil Patrick Harris for the role of Count Olaf after seeing him perform the opening number "It's Not Just for Gays Anymore", at the 65th Tony Awards in 2011, noting "I just immediately saw someone who could pull off a million things at once" as was necessary for the character of Olaf, who utilizes various disguises and accents in his quest to steal the Baudelaire fortune. Sonnenfeld also felt Harris had done enough work on both stage, screen, and film to handle the breadth of characterization that Olaf displayed over the course of the book series. Sonnenfeld had previously met Harris over Thanksgiving 2015, prior to Sonnenfeld being confirmed for the project. Sonnenfeld hinted to Harris about the potential role, and once Netflix hired Sonnenfeld, proceeded to offer him the role. In January 2016, Netflix announced that Harris had been cast as Count Olaf.

One of the key changes that Sonnenfeld and Handler wanted for the series was to make Lemony Snicket a more visible character narrating on adventures of the Baudelaires children from their relative future, allowing him to be in scenes without actually being part of the events. Casting Patrick Warburton for Lemony was Handler's idea, despite Sonnenfeld having worked with Warburton in several previous productions. Handler felt Warburton was an actor that can deliver comedic lines without being too obvious about it, as well as bringing the emotional breadth that the character needed to show. Warburton's casting was confirmed by March 2016.

It was also revealed that Presley Smith would play Sunny Baudelaire, whose quasi-nonsensical lines are voiced by Tara Strong. The casting department had initially sought a set of twin infants for the role, a standard practice to avoid complications from weariness during filming. None of those auditioned had the look that they felt was appropriate for the part. Smith however, had both the personality and look they felt appropriate for Sunny, and took the risk of casting a single actor for the role.

Other casting include: in March 2016, K. Todd Freeman was cast as Mr. Poe, and Aasif Mandvi as Uncle Monty. In September 2016, it was revealed that Dylan Kingwell and Avi Lake were cast as the Quagmire siblings, Duncan and Isadora, respectively. In November 2016, Handler revealed Catherine O'Hara, Don Johnson, and Alfre Woodard had been cast as Dr. Georgina Orwell, Sir, and Aunt Josephine, respectively; O'Hara had previously portrayed Justice Strauss in the 2004 film adaptation of A Series of Unfortunate Events. and Rhys Darby would play Charles, Sir's partner.

Production began in May 2016 in Vancouver, British Columbia, and in August 2016 several cast members expressed through social media that filming had finished. Filming for the second season began in April 2017. The third season began filming on January 5, 2018.

One aspect of the series of books that the production team wanted to be captured in the series was the notion of a lack of specific time period or geography for the settings; Handler stated that he wrote enough for establishing set pieces, but purposely left more specific details vague "in order for young readers to fill in the blanks themselves". Sonnenfeld wanted to capture that same sense of ambiguous time and place, and he and his team worked to try to define a set of subjective rules of what elements could be included. Sonnenfeld brought on Bo Welch, production designer for Edward Scissorhands, which Handler considered to capture the same sense of a "familiar but completely imaginary" suburban setting he had in mind for his books. While the production team used computer-generated imagery where needed, they attempted to avoid this use where possible, such as by using large painted backdrops, by key scenic artist John E. Wilcox, rather than employing green screen filming.

In April 2016, Nick Urata was initially reported to be composing music for the series. Once the first season was released, it was revealed that Urata collaborated with Daniel Handler to compose the main title theme, "Look Away", as well as various original songs that appear throughout the series, with Handler contributing the lyrics. The first season's original score was composed by James Newton Howard, with his frequent collaborators Sven Faulconer and Chris Bacon filling in to score certain episodes. In the second season, Jim Dooley joined the production as composer and subsequently wrote the music for eight of the season's ten episodes and the rest of season 3, with Nick Urata to compose the second season's first two episodes.

"Look Away", the theme song for the opening titles of the series, is performed by Neil Patrick Harris. In keeping with the tone of the book series, the song warns the viewer against continuing to watch the unpleasant story any further. The lyrics of the middle part of the song change for each pair of episodes, comprising a brief synopsis of those episodes' premise.

On July 5, 2015, a video titled "An Unfortunate Teaser" was uploaded to YouTube by a user named "Eleanora Poe". Netflix quickly released a statement saying "This was not released from Netflix." Media outlets were almost unanimous in agreement that the trailer was fan-made. However, Caitlin Petrakovitz of CNET argued that the trailer may be real and that Netflix's carefully worded denial was a marketing campaign, noting the user name "Eleanora Poe" being the same as a character from the series, and that a shellac record seen in the trailer was of The Gothic Archies, a band who provided the theme music for the audio books of A Series of Unfortunate Events. The trailer was later revealed to be a spec promo, similar to a spec script, by an independent commercial director, whom Netflix contracted to make a title sequence for the series after the video's popularity, though they did not go ahead with the concept.

In October 2016, Netflix released the first teaser trailer for A Series of Unfortunate Events, where Warburton narrates the events of the series as Lemony Snicket. A trailer, featuring footage from the series and Neil Patrick Harris's character, Count Olaf, was released by Netflix in November 2016, followed shortly by the first full trailer. The second trailer was released in December 2016, followed by a "holiday-themed" trailer from Count Olaf leading fans to a viral marketing website for the fictional Valorous Farms Dairy, which featured four holiday e-cards for download.

As part of the marketing for the third season, Netflix released a YouTube trailer of Count Olaf and Lemony Snicket on November 13, 2018 giving alternative accounts of the events of the previous seasons, with the former describing them as a series of "learning experiences" and the latter as a "series of unfortunate events". On December 10, Netflix released a second YouTube trailer, featuring Allison Williams as Kit Snicket and introducing Richard E. Grant as the villainous "Man with a Beard but No Hair" and Beth Grant as the villainous "Woman with Hair but No Beard".

All content from Kiddle encyclopedia articles (including the article images and facts) can be freely used under Attribution-ShareAlike license, unless stated otherwise. Cite this article:
A Series of Unfortunate Events (TV series) Facts for Kids. Kiddle Encyclopedia.