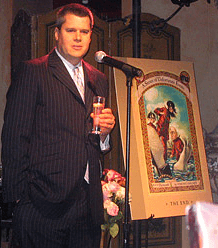 He is married to Lisa Brown and had their first child, Otto, in October of 2003. He finished 13 books to complete the Series of Unfortunate Events.

It is also believed by some people that his wife, author and illustrator Lisa Brown could possibly be the "Beatrice" that Handler writes his books for.

All content from Kiddle encyclopedia articles (including the article images and facts) can be freely used under Attribution-ShareAlike license, unless stated otherwise. Cite this article:
Daniel Handler Facts for Kids. Kiddle Encyclopedia.