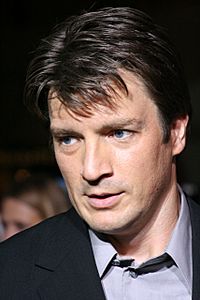 Nathan Fillion ( born March 27, 1971) is a Canadian-American actor. He was born in Edmonton, Alberta. Fillion is best known for the lead role of Captain Malcolm Reynolds in the television series Firefly and its movie continuation, Serenity, as well as his role as Richard Castle on the ABC series Castle.

All content from Kiddle encyclopedia articles (including the article images and facts) can be freely used under Attribution-ShareAlike license, unless stated otherwise. Cite this article:
Nathan Fillion Facts for Kids. Kiddle Encyclopedia.