Ruidoso Downs is a city in Lincoln County, New Mexico, United States, located within the Lincoln National Forest. The population was 1,824 at the 2000 census and 2,815 at the 2010 census. Originally incorporated as a village, it became a city in May 2002. Known locally as "the Downs", Ruidoso Downs is a suburb of adjacent Ruidoso and is a part of the Ruidoso Micropolitan Statistical Area. The city, located along U.S. Route 70, is named after the Ruidoso Downs Race Track, which is located in the city along with Billy the Kid Casino and the Hubbard Museum of the American West.

According to a local Ruidoso Downs historian, early on Hispanos settlers called the area "San Juanito." The settlers began arriving in the early in the late 1840s, and introduced rodeo and horse racing to the area. Originally the area had scattered farms and ranches, with the Dowlin Mill constructed in 1868. A new wave of families arrived after the Lincoln County War.

By around 1907 the road between Roswell and Alamogordo, which passed through the area, was still primitive, though it was improved in the 1920s through The Federal Aid Project. The road that would become US 70 was paved in the area around 1945, and then improved again in 1958. The road became four lanes in 1981.

In 1946 the Ruidoso News was founded and the airport opened, and two years later radio arrived. Electric lights appeared in the area in 1947. The White Mountain Inn opened in the 1940s as a sanatorium and as a lodging establishment.

There were 680 households out of which 39.0% had children under the age of 18 living with them, 48.8% were married couples living together, 17.4% had a female householder with no husband present, and 27.8% were non-families. 21.2% of all households were made up of individuals and 5.1% had someone living alone who was 65 years of age or older. The average household size was 2.68 and the average family size was 3.09. 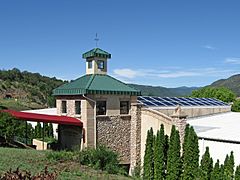 Hubbard Museum of the American West 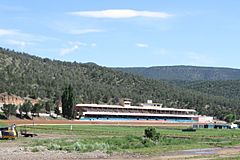 Ruidoso Downs Race Track and Casino, where the All American Futurity is held annually.

The city is the annual location of the All American Futurity, which claims to be the richest race in Quarter Horse racing.

All content from Kiddle encyclopedia articles (including the article images and facts) can be freely used under Attribution-ShareAlike license, unless stated otherwise. Cite this article:
Ruidoso Downs, New Mexico Facts for Kids. Kiddle Encyclopedia.