Burlingame is a city in Osage County, Kansas, United States. As of the 2010 census, the city population was 934. 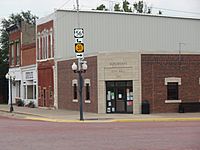 Burlingame was originally established as Council City and was an important stop on the Santa Fe Trail. The Council City post office was opened on April 30, 1855. The wide brick main street, Santa Fe Avenue, was built wide enough for an oxen team to be able to make a U-turn. The city and post office name was changed from Council City to Burlingame on January 30, 1858, in honor of Anson Burlingame.

During the Civil War the townspeople constructed a stone fort in the town center. Burlingame's Fort was torn down after the war.

The climate in this area is characterized by hot, humid summers and generally mild to cool winters. According to the Köppen Climate Classification system, Burlingame has a humid subtropical climate, abbreviated "Cfa" on climate maps.

Burlingame is part of the Topeka, Kansas Metropolitan Statistical Area.

There were 404 households, of which 32.9% had children under the age of 18 living with them, 43.1% were married couples living together, 11.6% had a female householder with no husband present, 7.2% had a male householder with no wife present, and 38.1% were non-families. 32.7% of all households were made up of individuals, and 14.8% had someone living alone who was 65 years of age or older. The average household size was 2.31 and the average family size was 2.90.

Allen Community College has maintained a campus in Burlingame since 1991.

All content from Kiddle encyclopedia articles (including the article images and facts) can be freely used under Attribution-ShareAlike license, unless stated otherwise. Cite this article:
Burlingame, Kansas Facts for Kids. Kiddle Encyclopedia.